Recently I’ve noticed how often people misuse the word “notoriety.” As in the following, from advertising for a construction company:  “Erecting the steel on each these projects in a safe and efficient manner brought them notoriety on a national level.”  I certainly hope not. Notoriety is specifically negative attention. Notorious construction usually leads to protracted litigation, and that’s not the kind of attention you want to bring to your enterprise.

Which brings me to the subject of Gurkha cigars, a brand of great “notoriety.” Utter the word “Gurkha” in a room of seasoned cigar smokers and inevitably the muffled laughter and condescending remarks will follow. When a company sells a single cigar for $825 (the cognac-infused Gurkha HMR) this is to be expected. But Gurkha as a company has in fact been enormously successful and has continuously increased production. The company recently expanded its corporate headquarters, moving them from Miami to Ft. Lauderdale, and currently produces cigars in five factories in Nicaragua and the Dominican Republic. 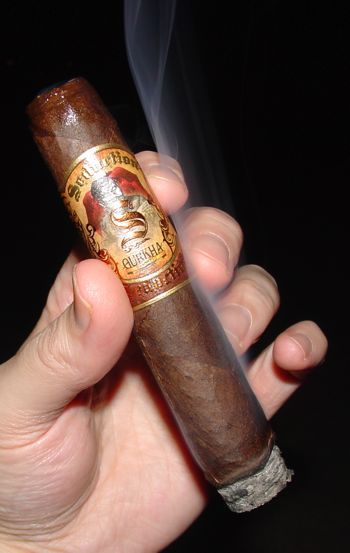 If that’s “notoriety,” I guess they’ll take it.

Gurkha’s Seduction blend was released last year, along side the company’s other newcomers, Cellar Reserve and Royal Challenge. Seduction is made at the Cuevas factory in the Dominican Republic, and features an unusual three country blend. The wrapper is a dark Ecuadorian Habano, beneath which is a Dominican Olor binder. The filler is entirely Colombian Corojo.

As is customary with Gurkha, the box and the cigar bands are the brand’s best advertising tool. The Seduction box has a black velvet texture, almost like suede, and is hinged on both sides of the box so it can unfold in the middle. The bronze and parchment-colored bands stand out against the dark shade of the cigars. Four sizes are in production:

The Seduction is not a maduro cigar, but the Ecuadorian Habano leaf that covers the cigar is consistently maduro in color. The wrapper is rough and slightly dry, and it smells like an abandoned barn. The roll is solid, and the cap is rounded and cuts cleanly. I’ve smoked a handful of these now and every one has been packed well and has drawn perfectly. The burn is mostly even. A couple cigars have shown rebellious tendencies, but these have been easily corrected.

I have smoked a dozen of these robustos over the past 9 months, and I’ve noticed that the flavor spectrum changes over time. When fresh, the cigar is bright and sassy. (I would expect that a cigar named Seduction should always be smoked fresh, and should always be bright and sassy. Otherwise it might be called Dirty Old Man in the Park. And given the cavalier way in which cigars are named these days, I’m expecting to see a DOMP on the shelves any day now.)

But the aged Seduction is a much mellower cigar, opening with rich billows of chocolate and muted cedar. The smoke is aromatic, but too heavy to convey much subtlety. The cigar produces a prodigious amount of smoke and burns slowly. I put the cigar down for about ten minutes to do something in the house and fully expected having to re-light on my return. But the half-smoked Seduction was still smoldering.

There is still a touch of spice in the middle third, but this gradually diminishes until the flavors are more or less leathery with sweet chocolate overtones. There is a fruity note which adds some complexity. The combination of chocolate and jammy fruit makes it a great dessert cigar, especially when paired with a full-bodied coffee like 19 Bold from the 19 Coffee Company. (More on 19 in an upcoming post.)

By the mid-point of the cigar the flavors meld into a pleasant but mundane blend of dry wood and coffee, and from there it’s a casual coast to the finish line.

Gurkha may not have hit the ball out of the park with this one, but it’s a solid double. I really enjoy the fact that this is a full-bodied cigar that is only mild to medium in strength, so it can be smoked at pretty much any time of day. The cigar is also veritable smoke machine. You could probably smoke a gopher out of its hole with this one, except the gopher might steal your cigar.

Going price is around $7.00, and this is a retail exclusive. Try one now, and put one away for a few months.