The invocation that serves as Homer’s introduction to the Odyssey is a fitting way to introduce Emilio Cigars’ rebranding of Grimalkin, now called La Musa. I studied Ancient Greek as an undergraduate and enjoy reading it still, so I applaud the name choice. I’m not sure if Gary Griffith was thinking of Homer when he chose this name for this blend, but it’s hard for an old classics major not to think of him in association with the word Mοῦσα. The other interesting word in the line is polutropon, an adjective which has no exact equivalent in English. A translator has no choice but to compromise. It’s like describing the aroma of a complex cigar: the result is always  a frail approximation, and the description is never an adequate substitute for the experience of smoking the cigar itself. Polutropon literally means “many ways.”  It  encapsulates the spirit of Odysseus — his craftiness, intelligence, and sophistication. Homer calls on the Muse to help him describe this ineffable man. Perhaps I should do the same before I try to describe this cigar.

Rumor has it that La Musa Mousa is a Nicaraguan puro, and more reliable information indicates that it is made in Esteli. Evidently the plan for La Musa is to release three lines, one for each of the three Plutarchian Muses, plus the original Mousa. (There are several different accounts of the Muses, so there are more of them available for expansion if necessary. With all those lovely ladies it could end up being the most popular booth at the trade show.)

The blend is available in four sizes, with a limited lancero release not listed:

The cover leaf on La Musa Mousa appears maduro in shade, with a rough texture almost like broadleaf. The cigar is rolled perfectly, terminating in a sharp torpedo tip. The draw has just the right amount of resistance, and it burns beautifully.

La Musa Mousa is an essentially Nicaraguan smoke, but it doesn’t start out that way. The first few puffs are much creamier than what I expect from a Nicaraguan cigar (and of course, I’m not completely sure that this cigar is entirely Nicaraguan) and the pepper gradually builds from there. Notes of coffee and cocoa appear in the aromatics, and there is an intermittent sugary sweetness on the tongue.

The complexity of the smoke is demonstrated in the middle section as woody flavors appear alongside the tobacco sweetness on the palate. The peppery intensity gets cranked up a notch as well.

The last part of this torpedo features bittersweet chocolate and tannic wood until it begins to char. It becomes quite powerful by the end (though others have characterized the cigar as “medium-bodied”) and the spice doesn’t let up. It had me tearing up and sneezing at points. In the best way, of course. There’s nothing like a good tobacco sneeze.

There are rumors that this cigar is made at the My Father factory, but it’s almost the inverse of a Pepin blend — it starts out smooth and saves the pepper blast for the finale. But if you gave me this cigar blind, I’d probably guess Pepin anyway: partly for its impeccable construction, and partly for the combination and complexity of flavors — wood and cocoa and pepper in a balanced and well-planned blend. It’s very much a full-flavored and spicy cigar, but it’s also quite creamy.

La Musa Mousa in the torpedo size sells for around $8.75 USD. Given the complexity of flavors and the superb construction of the cigar, that’s not a bad asking price. Seek it out if you’re a fan of big Nicaraguan blends, and let me know what the Muse tells you. 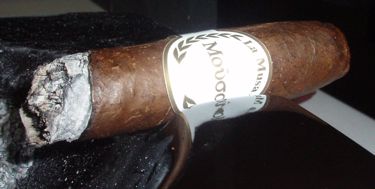