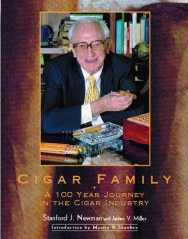 Stanford Newman is the chairman of the J.C. Newman Company, makers of Cuesta Rey, La Unica, and Diamond Crown cigars.

Published in 1999 by Forbes, Cigar Family is both a family history and a portrait of a cigar business that stretches from the late nineteenth century to today.

Newman’s book is a combination of biography, American cigar history, and business advice. He describes in detail the vicissitudes of the cigar business over the years, an industry that has been through numerous booms and busts.

Stanford Newman’s father, Julius "J.C." Newman., started rolling “buckeye” cigars in a barn in Cleveland in 1895. He was an independent contractor, selling his cigars to saloons and grocers. As he garnered more business, he hired assistants to roll cigars, and soon he was managing a small cigar company.

All cigars were hand-made up until the 20’s when machine-made cigars became more prominent. Consumers were far more price conscious at that time, and tended to smoke a lot more than they do now, up to five or six cigars a day. Newman mentions a number of times how raising the price of his cigars by a penny lost his company half its business.

Among the many interesting historical facts noted by Newman is the effect World War I had on the cigar industry:

The financial crisis of 1920 pulled the rug out from under many industries. Inventory values dropped over fifty percent. The most serious problem for the cigar industry was that in the 1920s, cigarettes became more popular than cigars for the first time in history. This happened due to the fact that the Red Cross had supplied millions of cigarettes to American soldiers during World War I. Many a soldier returned from Europe with a new taste for cigarettes.

But the M & N Co. pulled through this crisis with superior marketing and salesmanship. Innovations in technology and the courage to experiment were also reasons for the Newman family’s success. In fact, J.C. Newman was the first one to use cello as a packaging for cigars:

…The Package Machinery Company had introduced a machine in 1918 that encased cigars in a foil wrapper, and this had become a popular method of packaging cigars for several years. However, while foil helped protect cigars, it also prevented consumers from seeing what was inside. Too often, when smokers removed the foil, they discovered damaged or off-colored cigars inside. By 1925, the public had refused to buy cigars encased in foil.

…My father was well aware of the problem. In 1927, a local company that made cellophane bags for peanuts approached him about packaging multiple cigars in cellophane pouches; he immediately recognized the potential in cellophane. It would help protect cigars from drying out, while allowing consumers to see what they were getting. However, he did not like the idea of placing several cigars in a cellophane bag. He felt the best way to protect and present cigars would be to cellophane them individually. Thus, Student Prince became the first cigar in the industry to be individually wrapped in cellophane. Individually cellophaning cigars soon became standard practice throughout the cigar industry.

Newman’s story shows him to be a man who would probably have been successful in any business. He just happened to be born into the cigar business. After serving in the Air Force during World War II, he returned to join his father in the cigar industry, but never having been a smoker he was unfamiliar with the product.

As I contemplated my impeding return to the cigar industry, I decided that my first order of business would be to improve our tobacco blends. To do that, I would have to acquire a taste for cigars. It was time to become a cigar smoker. I wrote to my father and asked him to send me a box of fifty cigars…. Shortly thereafter a box of Student Prince cigars arrived for me at Fort Dix. At the first opportunity, I settled down for my first smoke.. I already had a good palate for food and wine. I expected it would be easy to develop a taste for cigars. I soon discovered just how hard it could be. The cigars were so strong to me that I became extremely nauseated. It took me a full month smoking two cigars a day to become accustomed to them. By the time I finished the box of Student Prince, I was prepared to become a tobacco blender.

He had more preparation than that, however. Just before the war he spent eight months sorting tobacco in Connecticut, during which time he was required to report on what he was learning to his father. Indeed, his father was a taskmaster, but it certainly paid off for the Newman family in the end.

One thought on “Cigar Family by Stanford Newman, Part One”