Cigar Science is an occasional feature of Cigarfan.net, an occasion which is usually prompted by the common cold or flu. In lieu of a cigar review, this is my humble effort to identify the organoleptic properties of cigar tobacco and to determine if the outlandish olfactory findings of certain cigar reviewers are justified… or if we should just keep our hallucinations to ourselves. 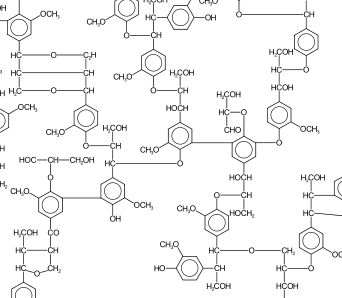 Lignin is an essential element of wood, and of most vascular plants, including tobacco.  (The word itself is derived from the Latin lignum, meaning wood.) Lignin fills the spaces between the cell walls of many plants, provides strength, and is thought to be responsible for moving water through cell structures.

This would be of no interest to cigar smokers except for one fact: lignin is “the most abundant natural organic aromatic polymer found in the vascular plant kingdom.”¹ Lignin accounts for 4 to 5 percent of tobacco weight; far less than hard wood, but significant nevertheless.

When burned, lignin produces phenols with specific aromatic properties, the most evident of which is the smell of wood burning. 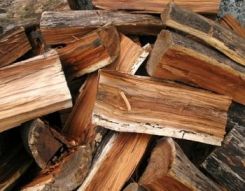 Two of these phenols, guaiacol and syringol, are responsible for the flavors of smoked foods. That is one of the reasons why more highly lignified woods (hardwoods) are preferred for barbeque.

Guaiacol is associated with smoky flavor, and is present in roasted coffee compounds, while syringol is associated with the aroma of wood smoke. Guaiacol is also a precursor to other phenolic compounds that contribute to flavors commonly found in cigar smoke: vanillin and eugenol. We all know what vanillin is, but the term eugenol is derived from the scientific name for clove, and its aroma is exactly that: clove-like. It has also been extracted as an essential oil from nutmeg, cinnamon, and basil.

These phenolic constituents are also produced as pheromones by certain insects. The desert locust is ardently attracted to guaiacol, and the orchid bee is erotically aroused by both eugenol and p-cresol. So don’t be surprised if these guys crash your next herf. They only want to make friends. 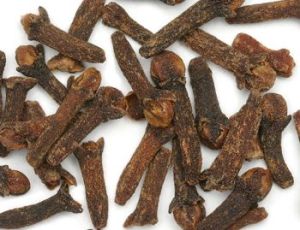 It’s difficult to say what chemical compounds are specifically responsible for the flavors and aromas of cigar tobacco –there are thousands of them — but it seems reasonable to me to say that we aren’t hallucinating when we find vanilla, or clove, or related aromas in cigar smoke.  Some cigar smokers are more sensitive to subtle aromas than others, and some people are just better at putting names to sensations; but I don’t think that it’s fair to say that an unexpected flavor, like honey or aniseed, is the product of an overactive imagination. Different people won’t always agree on the flavors they find in a particular blend, but to deny that those flavors are there seems unwarranted when there is a basis for it in chemical analysis.

Other flavor and aroma compounds have been discussed in previous articles, available here. 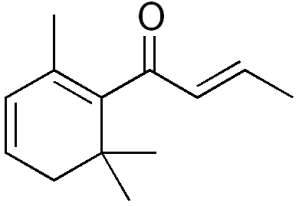 Of the thousands of chemical elements that compose a typical tobacco leaf there are a few that take primary responsibility for the taste and aroma of your smoldering stogie. Some of the more important elements have been identified as members of the carotenoid family.

Carotenoids are the pigments which give many vegetables and flowers their color. The obvious example is that belicoso-shaped delicacy known as the carrot, from which the word carotenoid derives. Carotenoids give that root its orange color. In other cases the carotenoid content is masked by green chlorophylls, but as the fruit ripens and the chlorophyll content decreases, the colorful carotenoids emerge. This is what happens when a green tomato turns red on the vine.

The process of ripening is really just the early stages of decay — the constituent elements of the fruit, or in this case the leaf, are breaking down and releasing new and more organoleptically interesting compounds. Carotenoids are highly sensitive to oxygen, light, and temperature, and all of these things are carefully controlled by the tobacco grower as the crop is grown, harvested, and particularly during the curing and fermenting stages.

The major carotenoid pigments in tobacco are lutein, beta-carotene, moxanthin and violaxanthin. As these carotenoids break down via oxidation, aromatic derivatives are formed which are crucial and distinctive to the crop. For the sake of example, we can take one of these pigments, lutein, and look at some of its derivatives.

Lutein is found in leafy green vegetables, most prominently in spinach and kale.  (And yes, tobacco too.) It is important nutritionally, but for our purposes here we are most interested in what happens when it degrades. Lutein breaks down during the air-curing process to several ionones and their derivatives, such as Beta Damascenone and Megastigmatrienones, two of the carotenoid derivatives which are most responsible for the smell of tobacco. 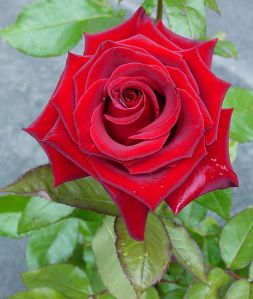 Beta Damascenone is one of the rose ketones and is considered to be the marker for quality rose oil, even though it is present in extremely small quantities. For whatever reason, the human nose is very sensitive to this smell and very little is needed to detect it. Interestingly, it is found in beer, and is responsible for some of the floral notes in red wine (especially merlot.) In addition to its floral nature, beta damascenone is also associated with the smell of baked apples. It is not present in fresh apples, only baked. Other descriptors:

Closely related to the damascenenones (and damascones) are the ionones; in fact, they’re all part of the rose ketone group. Ionones are present in almost every type of perfume, and are almost always described as woody with strong violet accents.  Both alpha and beta ionones have been identified in cured tobacco leaf. 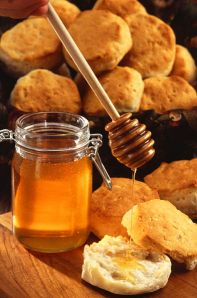 Don’t ask me how to pronounce it, but megastigmatrienones is arguably the smell of cured tobacco. Its four isomers have been isolated or synthesized and used in commercial applications to impart or “improve” the smell of tobacco and to cover up other unwanted odors. (It is available commercially as “tobacco cyclohexenone”.) It is sometimes held responsible for the note of tobacco that is often detected in full-bodied red wines. Most frequently the aroma of megastigmatrienones is associated with the following:

Other interesting carotenoid derivatives found in cured tobacco are theaspirone, an ingredient in black tea and a component of tea essential oil, and beta-cyclocitral, which is described as green, grassy or hay-like. 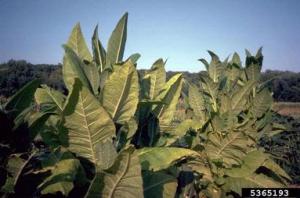 Many cigar enthusiasts have detected flavors like these at one point or another. Floral, honey and tea-like notes I find most often in milder cigars, usually with shade wrappers.  And while these are just a few of the elements from only one group of the many compounds that contribute to the flavor and aroma of cigar tobacco, I hope it shows that notes of tea or grass or violet are not out of the range of possibility for some experienced cigar enthusiasts.

So if you find yourself musing over the soft wood and floral notes of that ’02 Choix Supreme and suddenly detect a hint of honey, consider yourself fortunate… not crazy. 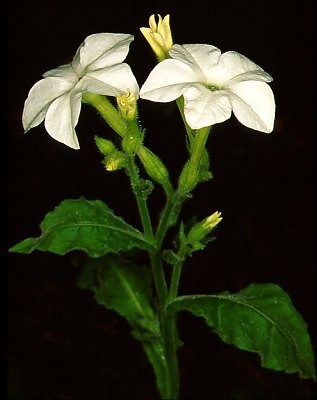 I’ve done it. You’ve probably done it as well. At one point or another, most cigar and wine enthusiasts have gotten a little carried away with their flavor descriptors. The aroma of a premium cigar or the bouquet of good wine cries out for comparison to the other fragrances we encounter in our daily lives, but the subjective nature of this comparison often mystifies those who are less sensitive to the subtleties involved.

So we take the occasional lump for detecting notes of caramelized sugar or violets or vanilla beans in our stogies. Everyone will acknowledge that taste is subjective, and the fact that you smell cedar where I detect mint does not mean that either of us has faulty olfactory organs — but few cigar smokers recognize the physical reality, the purely chemical nature of the combustion taking place beneath their noses.  To some extent this process has been studied, and this series of occasional articles will attempt to shed some light on it.

But first, a caveat. I am not a scientist, and I am certainly not a chemist. All I’ve done here is layman’s level research, and I can’t pretend to understand the chemistry in detail. If I mislead or mistate something, I hope someone with expertise will correct me, and accept my thanks for doing so.

Much of the aroma and flavor of cigar tobacco arises from careful curing and fermentation. As the leaves dry and undergo a natural but controlled process of degradation, chemical compounds break down and create other compounds. Many of these compounds are responsible for the flavor and aroma of cigar tobacco.

Leaves from different stalk levels vary in their chemical properties — the highest leaves on the plant  (ligero) have higher nicotine levels, tannins and resins. As most of us have experienced at one time or another, a ligero-heavy cigar is frequently powerful and highly aromatic, but doesn’t burn very well . Middle and lower leaves (seco and volado) tend to have lower levels of nicotine, less resins, higher soluble ash, and better burning properties.  The importance of careful blending of leaves from different parts of the plant is easy to see here.

In general, the strength of a cigar tobacco leaf is associated with nitrogen compounds. Aromaticity is thought to come from tannins and resins. Sugars and starches are are associated with mildness. 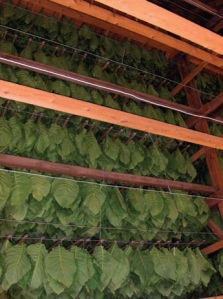 As soon as a leaf is separated from the stalk during the harvesting process it begins the process of curing.  In cigar production the newly primed leaves are removed to a curing barn where the tobacco is hung for curing in the open air. As the leaves turn from green to brown, the following physical and chemical transformations occur:

Cigar tobacco that has been properly cured is not quite ready to be bunched and rolled — it must be fermented first. Stacks of tobacco called pilones are created and allowed to heat up. The combination of heat and water (from the leaves themselves and also applied by workers) causes further chemical decomposition. The main processes that occur during this stage are the following:

Oxidation is the primary activity occuring in the pilones during fermentation, and this is chiefly responsible for the flavor and aroma of cigar tobacco.  During this process the cured tobacco releases carbon dioxide and significant quantities of ammonia.

For social and health reasons, tobacco is  the most exhaustively studied natural product on earth. Around 5000 different chemical compounds have been identified, and studies continue. But the primary constiuents responsible for taste, flavor, and burning properties are the following: 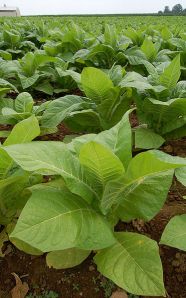