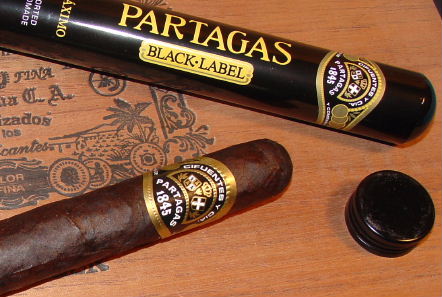 It seems fitting to follow up a review of Macanudo with a review of a Partagas cigar. In a lot of ways Partagas is the rougher tougher sibling of Macanudo, but they share a common heritage. Cuban master Ramon Cifuentes was the man who developed both of these cigars, though he will always be remembered for Partagas in particular because he and his family before him owned the Partagas factory in Havana before the revolution.

Fidel Castro offered Cifuentes command of Cuba’s nationalized cigar industry in 1961, but for obvious reasons he refused. (Let’s see here. You take away my property and my livelihood and then you offer me a job managing it for your government? No thanks.) Instead Cifuentes went to Connecticut where he was soon working for Edgar Cullman and General Cigar. Cullman put him in charge of General’s operations in Jamaica, where Cifuentes would raise Partagas again, like a phoenix from the ashes, in a new Jamaican form.

In the mid-1970’s General released its Cifuentes engineered Partagas with a Cameroon wrapper. But the extra load placed on the Jamaican factory where Macanudos were also being produced resulted in friction with the labor unions there and a move to the Dominican Republic was soon in the works. Today Partagas (as well as Macanudo) in all their various forms are manufactured by hand in the Dominican Republic.

The Partagas Black Label is a relative newcomer to the General family of cigars. Released in 2001 in response to the demand for full-bodied cigars, Cifuentes protege Daniel Nunez blended this cigar to appeal to fans of maduro and spice. The highlight of the cigar is a jet black sun grown medio tiempo Connecticut broadleaf wrapper. Medio tiempo leaves are the highest leaves on the tobacco plant, the last ones to be harvested. Medio tiempo broadleaf is tough stuff, grown to withstand the rigorous fermentation process that renders it this rich dark shade.

Unlike Macanudo, which is known for its rock solid consistency, I have found the flavor of Partagas Black to vary depending on the size and the age. Most bold and spicy cigars will mellow with age, and I have found that to be the case with this one as well. The pair of Maximos I smoked for this review had been aged for about a year, and were several degrees less spicy than other Partagas Blacks I’ve smoked in the past. Whether this is because of the size or the age, I’m not sure, but I was surprised nevertheless.

With Nicaraguan ligero and piloto cubano at the core and a medio tiempo wrapper, this should be a powerful smoke. And while they were tasty, full of sweet char and a pleasant woody base flavor, I didn’t find them all that spicy. A little chocolatey, a little coffee beaney, but not spicy. Actually, they were quite smooth, and to be honest I preferred these Maximos to my previous experiences with the Black Label. A couple years ago I tried the Black Label and found the pepper overwhelming and way out of balance with the rest of the blend. Today these moderately aged Maximos are powerful enough to keep my palate interested, but not so much that I can’t kick back and savor the other flavors and characteristics of the cigar. Additionally, the rich maduro taste is helped out by a leisurely and even burn.

I’m going to have to pick up a few more of these from the B&M in different sizes just to satisfy my curiosity. They’re reasonably priced and despite the varying levels of spice and intensity they’ve all been fine smokes. Maximos come in aluminum tubes, so maybe that has something to do with the relative mildness of the cigar. Who knows? I guess I will just have to commit a few more Black Labels to the fire in the name of research to find out.