The concept behind illusione Cigars was to re-create a specific taste profile from years past. Before the Sandinistas took over Nicaragua in 1979, Nicaragua was growing some of the best tobaccos in the world. The cigars made from these prized fields in the Jalapa Valley and Esteli region were strong, bold and clean. After years of neglect, these old Somoza fields have been re-cultivated by the legendary master grower Arcenio Ramos of Cuba. Along with Fernando, Chandito and famed agronomist Jacinto, Arsenio has assembled the veritable “dream team” of tobacco production. They have re-grown these humble acres to yield their fullest potential once again. All illusione cigars are made from first generation Corojo ’99 and Criollo ’98 seeds, wrapped with a grade one Cafe Colorado wrapper, and finished with a triple cap in the Raices Cubanas factory. illusione cigars deliver a taste and quality of smoke rarely found in today’s market. All of the cigars are made in small-batch quantities to maintain quality and consistency.

On occasion, cigar smokers delight in finding a hidden treasure. A sleeper, available for a while but only known to a select few who, for whatever reason, don’t acclaim their find (probably hoarding syndrome). illusione cigars definitely fall in this category. Well, the cat’s out of the bag and the cigar world is buzzing! 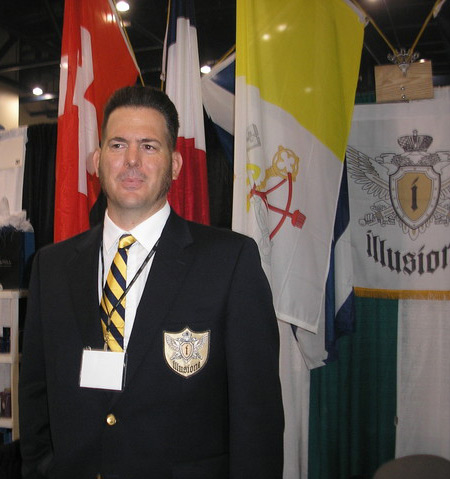 Not your typical cigar brand owner, Dion Giolito (aka vudu9 on some of the forums) self proclaimed Dark Overlord of the Leaf, is the mastermind behind these beauties and is certainly a character in his own right. He believes that there is a lot more to our world than meets the eye. Regarding world control, Dion suggests: “We are fed the ideas that certain countries and heads of state are in control and run things. That’s the furthest from the truth. They’re smoke and mirrors, puppets, figureheads, ‘illusions.’ The real power is far deeper and, much darker than we see.”

illusione, the name of his cigar company, takes it’s meaning from the conspiracy culture and gives us a glimpse into the mind of the man who leads it. Dion has been in the cigar business about 15 years and opened his shop named Fumaré in Reno, Nevada just a couple years ago.

Kind of a humorous side note, be careful not to be fooled by the type face illusione uses on their brand markings (box, band, website, etc). I was gifted my first cg4s by a forum buddy (thank you diger) and with nothing but the band to go on, for the first couple weeks I was calling them Musione. I even joked with friends about them being from Italy with no info or website to be found. When I told Cigarfan I’d found this wonderful cigar, he quickly set me straight. The gothic font makes the “ill” look like an “M” and without a magnifying glass (for us aged folks) it’s damn hard to tell! Well … it is!

Unique cigars from a unique cigar brand owner, the illusione vitolas are Honduran-made, Nicaraguan puros with a growing reputation for being powerful, flavorful and balanced. When asked about his cigars, Giolito is enthusiastic. “My cigars are the kind of cigars I like to smoke – clean, bold, strong and aromatic – the way that Pre-Sandinista (1979) Nicaraguan cigars used to be. They’re ‘component driven’ meaning they have layered and structured flavors.” All of the tobaccos used are aged for about 3 years before they’re rolled into cigars. Then, they spend 35-90 days in a cedar aging room and finally they are boxed. Interestingly, after seeing how several months of box aging could contribute to his cigars, Giolito began the practice of date coding all his boxes of cigars. He says that illusione cigars are built to live a minimum of 10 years in the box. He also says the world, as we know it, will end late December 2012 so I wouldn’t wait that long if I were you. Smoke ’em if you got ’em!

Cigar Insider (7 August 2007) released their results of a vertical brand tasting with 8 of the 9 illusione cigars rated, scoring 90 points or better. The ‘cg4′ reviewed here tied for top honors with the ’68’ vitola at 92 points. For its CI debut, I’d say that is a slam dunk! There is a discrepancy between the Cigar Insider piece and the illusione website regarding where these cigars are made. As I have listed above, the website shows Raices Cubanas in Honduras but Cigar Insider claims they come from the Fernandez y Fernandez factory, which is a subsidiary of Tabacalera Tropical. I deferred to the website as authoritative although they themselves have a discrepancy in the ring size of the cg4 so, who knows.

Dion vows to remain “small batch” with illusione cigars. That is, maintaining production levels where he is making cigars that can remain at a level of quality and consistency deserving of the true connoisseur. Production this year was about 185K cigars and Dion does not want to go over 500K per year. In his interview with Doc @ Stogie Fresh he informs us only 200 B&M stores in the US will carry the illusione line of which he already has 110 identified. For us less fortunate folks without local availability, there are already a couple online vendors and hopefully will be more for price competition sake.

Unlike allot of other cigars brands which offer different sizes of the same blend, illusione blends are different in each vitola. Initially, I was contemplating a comparison of the cg4 with some other sizes (’88’ & ‘888’) but after experiencing them I feel it’s appropriate to review them separately. Each is unique unto itself and I don’t think comparison will be my approach. However, I will say the wrapper flavor is the only common thread in those I’ve tried. Very distinct flavor and it appears in each one.

Bottom line up front …..
The cg4 White Horse is graceful, balanced, very flavorful and aromatic. A very high quality piece of work. Having never heard of them, I was a little doubtful when it was gifted to me saying they were released a couple years ago and tasted “really good.” I don’t know how they have remained under the radar. An excellent cigar. Get em’ when you can. These are going to become very popular and probably very scarce given they will only be produced in small quantities.

Pre-light
The cg4 White Horse blend uses the hybrids Criollo 98 and Corojo 99 predominantly consisting of Viso and a half leaf of Ligero. It sports a double-binder and is finished with a Rosado oscuro Corojo wrapper. Dark and alluring, the stick is solid and feels very nice in the hand. If you look very close at the wrap it is slightly mottled and has some small insignificant veins but no tooth to speak of. A beautiful Cuban (or should I say Pepinesque) style triple cap. From the wrap a gentle tobacco aroma and at the foot a little earthy. The band is very simple yet sophisticated. All-in-all the pre-light experience is feeling like I’m getting ready for one of my favorite smokes and I’m thinking, how could I have not seen or heard of these cigars? Punch is clean and pre-light draw excellent. Post draw, just a little sweetness on the lips.

The Smoking Experience
At the start a rush of sweet toasted nuts rolls over the palate with a little bite on the nose. The initial bite lasts a few draws. Once warmed the blend begins to flow rich layers of toasted oak, earthy sweet leather, nuts and cocoa onto the palate with some notes of spice and java. Another flavor is present which I can’t describe but it really sets this cigar apart from others I’ve smoked. The aroma is sweet and nutty with a “twang” similar to the mystery flavor. Nice long dark cocoa finish. Plenty of nice cool smoke from this one and smoking time is right around an hour. I actually had my wife comment on how nice the aroma was and, believe me, that never happens! Draw remained superb throughout the smoke.

The initial medium gray ash held to almost the halfway mark and yes it dropped in my lap. One of the drawbacks to getting good ash pictures. The remainder of the ash was still attached to the nub when I put it down for the last time. The burn was clean and although the burn line was a bit bumpy at times, it never required correction.

The website describes this cigar as “bold, clean and bright – complete.” I couldn’t agree more. The bold, clean and bright part certainly describes the flavor experience I had and complete … well, this one totes the whole package. I think the medium to full strength rating as accurate as well. Medium to about the two thirds mark where it builds in intensity to full at the nub.

My take …..
I really really like this cigar. It just struck a chord with me. Pre-Sandinistas Nicaraguan flavor (if that is what this is) does me good! Loads of flavor and aroma is what I look for and this one’s got ’em!

What others are saying about illusione cigars …..

Cigar Aficionado Forum discussion of illusione
with some insights from Dion