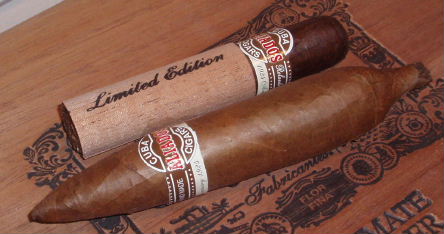 Before there was Puros Indios there was Cuba Aliados, the original brand and pride of master cigar maker Rolando Reyes, Sr. Today his cigars are made in Danli, Honduras, but the name “Cuba Aliados” conjures up images of an earlier time when these cigars were rolled in Havana.

Reyes’ experience in the cigar business stretches back seventy years and includes training and employment at the Partagas and H. Upmann factories in Havana. Eventually he opened his own factory — the original Cuba Aliados, named for an old bus line — that was producing six million cigars a year for the Cuban domestic market when it was seized by the Castro regime after the revolution.

The Reyes family moved to the United States in 1970, and after struggling to gain a foothold in Union City, New Jersey, Cuba Aliados was born again. Demand for Reyes’ cigars soon exceeded the supply, so they migrated first to Miami where they increased production, and then to Honduras several years later. They still maintain a presence in both Union City and Miami.

For many years Cuba Aliados had an Ecuadoran Sumatra wrapper similar to the one on the Puros Indios cigar, and was distributed exclusively by JR Cigars. In 2004, distribution rights were reacquired by Reyes and the occasion was marked by a change to distinguish the two brands — a new Nicaraguan corojo wrapper was introduced to the Cuba Aliados line.

So I was thrilled to receive a sampler pack from Puros Indios that included two of their new Cuba Aliados Anniversary cigars — a beautiful Diadema No. 3 with a natural Ecuadoran Sumatra wrapper and a Short in a rich and dark corojo maduro. The press release notes that both of “these unique sizes have come to represent Cuban Master Blender Rolando Reyes Sr. and his 60 years of experience in the tobacco industry.”

These Anniversary cigars celebrate both the century-plus tradition of the Cuba Aliados brand name as well as the seven decades of Don Rolando Reyes’ work in the industry. They will be available in both Nicaraguan corojo and Ecuadoran Sumatra wrappers, with filler from Brazil, Nicaragua, and the Dominican Republic, and Ecuadoran Sumatra binders. All tobaccos are aged for at least six years and total production will be limited to between 200,000 and 300,000 cigars.

The Diadema No. 3 is an example of the cigars maker’s art at its highest. These are made completely by hand and without the use of molds, which takes considerable skill and experience. My sample suffered a little damage in shipping, but I was able to repair it with a little vegetable glue and it smoked fine. The prelight scent is slightly cedary and it cut cleanly to open a free prelight draw. The tapered foot lights as easily as if it were a candle. (In a Cigar Aficionado interview Rolando Sr. joked that some people are intially confused by this unique shape and don’t know which end put in their mouths!)

The first third focuses on cocoa and caramel aromas with a mild taste and almost no finish. It burns slowly and evenly and the ash holds nicely. The flavor builds gradually, bringing at the end a zing of pepper and a sharp aftertaste that sneaks up and wakes me from my reverie as the ash nears my fingertips. This is a very refined cigar with a sweet cubanesque aroma that at times reminded me of maple syrup. It’s an easy going but sophisticated medium-bodied smoke.

The Short has an altogether different personality, starting with an oily corojo maduro wrapper that makes it look like a thoroughly grilled sausage link. There’s a ton of flavor packed in this 4 x 48 firecracker, but any prelight indication of this is hidden beneath a cedar sheath which imparts a distinctly woody scent to the wrapper. Once lit this little guy pours on a full-bodied sweet and spicy flavor with a rich leathery aroma and some residual cedar. Into the second half, the sweetness from the wrapper predominates. The woody component reminds me of PI’s Cienfuegos, but the Aliados is stouter, with more bittersweet chocolate and coffee notes. This is the heaviest cigar I’ve smoked from Puros Indios, and the rich flavor is best enjoyed slowly, sipped like a smoky cognac. My only criticism is that the thick and oily wrapper tends to burn erratically and needs an occasional touchup.

These are outstanding cigars, the best of the best from Cuba Aliados, and a fitting tribute to the master who started it all so many years ago. Suggested retail prices are $12.00 for the Diadema and $8.00 for the Short.

Thanks to the fine folks at Puros Indios for allowing me to preview these cigars. Stay tuned for the official announcement of interesting developments at PI for 2008: a new company name, a new logo, a new website and — most importantly — new blends, including their first cigar with a Cameroon wrapper!