Being a lover of Pepin Garcia’s cigars, I follow events surrounding their production with great interest and, like many others, have a little concern about the volume of labels this man is producing. Not that I have experienced any degradation in quality but at some point, common sense would tell you something’s gotta’ give. There was some negative buzz surrounding new production at Pepin’s Tabacalera Cubana de Garcia y Fernandez, S.A. (TACUBA – co-owned by Garcia and Eduardo Fernandez) in Estelí, Nicaragua, which opened mid-2006. Most aficionados were concerned about maintenance of production quality and the availability of tobaccos but honestly, as a consumer, I have not detected any problems. Products are readily available (relatively speaking) and the quality seems to be improving IMHO. TACUBA will pump out 2 million-plus cigars in 2007 and the Miami facility, will achieve ~700,000. Jaime says, “The company will grow, but not at the expense of quality.” I believe him.

—Some of the cigars produced at TACUBA

A side note — Please do not confuse Tabacalera Cubana de Garcia y Fernandez, S. A. (TACUBA) owned by Garcia/Fernandez with Tabacalera Cubana Corp. (a cigar manufacturer) and Tabacalera Popular Cubana, Inc. (a cigar retailer) both of which are owned by Pedro Gomez and his sons Edel and Joel. Back in 2003, Altadis won a law suit against the Gomez family for violating Altadis trademarks by selling “Cuban replica” Montecristo, H. Upmann and Romeo y Julieta cigars. A federal judge ruled the Gomez’s were personally liable for the damages and awarded Altadis $900K. An expensive mistake. In addition, there is another factory in Estelí, Tabacalera Cubana Nicaraguense, S. A. (TACUNISA) also totally unrelated.

Pepin has been rolling cigars since the age of 12 and aside from 2-years in the military, has not stopped. He received the rank of Tabequero Maestro while rolling and blending cigars in Cuba. He can make just about anything out of tobacco leaves. He personally specializes in those extremely difficult large figurados called diademas or salomons. A torpedo head and supple curves as you get toward the foot, which has a big bulb then a small nipple. It takes a lot of cuts to make that work, and Pepin makes it look simple. He always seems to smile as he rolls. Watching him, you can tell he really enjoys what he’s doing. He trained rollers in Cuba, and now he’s training them in Miami and in Estelí.

When Pepin Garcia left Cuba for Nicaragua, he worked with Fernandez in the Jalapa region, and then opened El Rey de los Habanos (Little Havana) in 2003. High ratings in Cigar Aficionado soon followed. But the Garcia’s could only do so much in Miami. Given the tiny factory had a total of 12 rollers, expansion was inevitable and I believe the addition of 36 pairs of rollers in the TACUBA factory learning from Pepin is a boon for cigar smokers everywhere. There are differences in rolling approach at the 2 factories. In Miami, the cigars are made by one person, who bunches and wraps. In Estelí, the bunching is done by one worker, the wrapping by another, thus the “pairing” of rollers.

To help bring TACUBA up to speed Pepin’s son, Jaime, now spends much of his time there: one month in Nicaragua, followed by a few weeks in Miami, then back to Nicaragua. His father does a similar rotation to ensure that one of them is at the Estelí factory on most days.

It’s amazing to think that, with so many cigar making operations out there collectively employing tens of thousands of rollers, probably 50-60% of the cigars I regularly smoke are made by the same 12 rollers in one tiny little factory in Miami and 72 rollers in one slightly bigger factory in Estelí. That’s right, I am a Pepin whore and proud of it!

In an interview Pepin was asked what tobaccos he would use to make his finest cigar. Would it be all Cuban? All Nicaraguan? He replied, “The wrapper would be Cuban. The binder would come from Nicaragua, as would two leaves of ligero filler. The seco and viso filler would come from Cuba. That cigar,” he says with confidence, talking about his dream smoke, “would score perfectly in anyone’s rating system.” Jaime Garcia claims, “Cuban tobacco is the best in the world, when worked properly. Nicaraguan tobacco is very close to the quality of the best tobacco in Cuba.” I think the Garcia’s tried to create that incredible “dream cigar” when they blended the Serie JJ, or come as close to it as possible sans the Cuban tobaccos.

It is arguable that Don Pepin is currently making some of the best smokes in the world today. His secret family recipe for blending and fermentation has been handed down generation to generation since his family’s beginnings in old Cuba. I for one am oh so glad he left the island. Thanks Jose for all these fantastic smokes. Keep em’ comin’ big guy!

The Don Pepin Garcia Serie JJ, a medium to full-bodied Nicaraguan puro, was blended by Jose in collaboration with his son and protégé, Jaime—thus the name “JJ”. It debuted in 2005. The tobaccos are rich Nicaraguan leaf that rivals the flavor, character and experience of the finest Cuban cigars. Exquisitely made with the careful construction that has become a DPG hallmark. This amazing cigar, which Pepin proudly called “his masterpiece”, was one of the highest rated and top selling cigars of 2006/2007. Because it is so popular, he has blessed the cigar world with a delicious Maduro version of this world-class blend, released at this years RTDA in August. Although it is not the first Maduro created by Don Pepin, it is the first with his name on it.

Also a medium to full-bodied smoke (ERDLH calls it 3/4 to full); the Serie JJ Maduro is an exquisite cigar sporting a luscious Nicaraguan Maduro Corojo wrapper leaf. It is a smooth smoke building in complexity as it is enjoyed and the aromas are truly mouth-watering. I have mentioned to several buds that I think the Serie JJ Maduro could be serious competition for the PAM. Not quite as strong but has all the other attributes one looks for in a special occasion cigar and comes in at less than half the price.

Both Cigarfan and I have sampled the Serie JJ and the following review represents a combination of both of our observations.

Bottom line up front …..
Both the Rosado and Maduro versions of the Serie JJ are not to be missed for anyone who enjoys complex full-bodied smokes. These are some serious good smokin’. The core blend is clearly evident in both while the different wrappers impart a unique experience. Son magníficas y deliciosos!

The Serie JJ is said to be one of Don Pepin’s favorite smokes. It ranks up there for me as well!

Pre-light
Both the Rosado and Maduro appear a bit ruddy with a few veins but the construction is solid with no soft spots. The belicoso’s are beautifully triple-capped in a large swirl. There is a very small tooth over the entire wrap. Pre-light draw is excellent with perfect resistance and the belicoso feels balanced in the hand, like it belongs there. 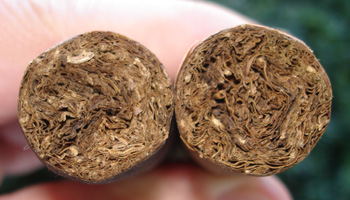 Rosado
The wrapper is a light-brown Rosado Corojo which is not as dark as regular Corojo and is a bit creamier on the palate. There is very little pre-light aroma from the wrap though the pepper did tingle my nose, even unlit.

Maduro
A thick, oily dark-brown wrapper with a deep red hue in the background envelopes this stogie. The aroma from the unlit wrap is hay with a touch of barnyard. The pre-light draw leaves an ever so slight sweet taste on the lips.

The Smoking Experience
Both versions of the JJ toast and light very easily for a large ring gauge and draw is superb end to end. Both burned well with the burn line getting a little bumpy but self correcting.

Both exhibit lite bite for the first half inch and then hold medium strength until the halfway mark where they begin to ramp up. The last third of each fit squarely in the full strength category. Doesn’t make you dizzy though. The nicotine is not overpowering. Just enough to let you know that you have smoked a fine cigar!

Both had a good volume of cool smoke and time to nub was around an hour fifteen minutes. Each provides a long smooth finish with a pleasant aftertaste of dark coffee or mocha.

Ash on both is a light to medium gray and holds well. First ash for me would hold until about the halfway mark. The Maduro ash did a little flaking but nothing obtrusive. I did find it interesting that both cigars seemed to have better flavor if I kept the ash short. Unusual.

Rosado
Starts with a little pepper on the back of the throat and some sharp pepper on the nose. That lasts about 1/2 inch, and then warms to a creamy and smooth core of toasty wood and leather with very distinct notes of vanilla, cherry and cinnamon. Some hints of coffee and toasted nuts (maybe roasted cashews) in the second half. Aroma is of sweet tobacco and has a “Corojo twang of pepper” pretty much through the entire cigar.

Maduro
Start is similar to the Rosado but has a little sweet edge to it I attribute to the Maduro wrap. It settles into a darker earthy core flavor of sweet wood and bittersweet chocolate with notes of espresso and cinnamon. The flavor and aroma is so buttery you might think you were in the theater for a movie. The aroma from the Maduro wrap is remarkably strong—that’s one serious leaf. You may want to have a handkerchief close by for the aftermath. What starts as a little pepper on the tongue and the back of the throat continue through the entire cigar. Pepper really ramps up in the last third.

My take …..
I read that Don Pepin Garcia feels cigar aging is not necessary, in fact, he says Cuban cigar makers pitch product if it hangs around the humidor too long (love to dumpster dive in that neighborhood). I find that intriguing since I am sitting on about 350 Pepin sticks that just seem to get better and better the older they get!

Both Serie JJ varieties are top notch and near the top of my favorite cigar list. You won’t find me without some these in the humi unless I’m pushing up daisies and my wife has thrown them away or, perish the thought, Pepin stops making them.

Both Cigarfan and I are hoping a little age will temper the pepper in the Maduro version. I like a little pepper, but in moderation.

Buy it again … As many as I can afford

What others are saying about Don Pepin Garcia Serie JJ (White Label) …..