“We deliver only the finest, handmade, complex cigars with the flavor of the Cuban heritage out of which the Padron recipe was born. Our primary mission is the exceptional quality of our product, not the quantity produced. As a vertically integrated, family-owned company, we pay personal attention to every detail throughout all steps of our tobacco growing and cigar manufacturing process. Because we strive to give you, the smoker, the confidence that each cigar is the same ….. perfect.”

This comparison review is one in a series on the original Padron line of cigars. When we have completed reviews on the entire line, a vertical tasting for each wrapper will be published. Each review will be an amalgam opinion of cigarfan and lucky7 along with that of the guest reviewer(s). Our guest reviewer for this vitola is:

“Delicias” is a commercial vitola with no standard dimensions. The best known Delicias is the one made in Cuba for Fonseca — ironically, the factory vitola for Fonseca’s Delicias is called “Standard.” That cigar measures 4 15/16 inches by a 40 ring gauge. Other Delicias are much larger, such as Don Pepin’s 7 x 50 churchill, or smaller, like the 30 gauge mini Cubita Delicias. All of which have no relation to Padron’s fat corona in our sights today.

Both the natural and maduro versions of Padron’s Delicias look like they’ve just come in from a hard day on the range, an attribute common to the classic Padron Series. And they smoke a lot like they look — they dispense with the formalities and get down to business right away. 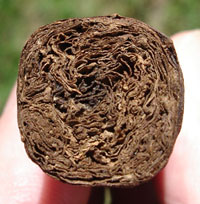 The wrapper on this cigar is remarkably swarthy for a “natural.” The wrapper’s edges look more ripened than the rest of the leaf, giving it a foxed appearance. The head is nicely formed and finished with a flat cap. The roll of the cigar varied from firm to very spongy, but the draw was consistently free. Jon described it as ” bumpy, lumpy, a bit lopsided, and full of tooth,” an observation we all agreed with. Clearly this stick is not a natural beauty, but as Jon went on to say,

…the rusticity of the Delicias is endearing. When I look at this cigar, warts and all, I imagine what cigars must have looked like hundreds of years ago: rough, bumpy, and raw. I kind of dig it.

The Delicias opens up with the eye-opening blast of pepper well known by fans of Nicaraguan tobacco. It quickly settles down to a woody base with a sweet leathery aroma. It burns a bit recklessly, but doesn’t require correction, meanwhile producing a light gray ash with black accents.

Bean flavors take the spotlight in the second third, though Jon noticed these in the first third as well. Up front there are cocoa, coffee and a gentler spiciness as the cigar seems to be taking a break at this point. Toasted wood lingers in the background, and the aroma remains basically leathery. Cigarfan noted some hickory aspects to the aroma and found the aftertaste quite tangy.

The last section is marked by increasing intensity. The flavor becomes earthier, and the pepper returns with a vengeance. Lucky7 described this section as “very strong tobacco” while cigarfan experienced a strong peppery flavor bordering on harsh and noted a hot burn and a bitter aftertaste.

Jon concluded with an apt metaphor:

The Delicias picks up where it left off in the home stretch: regaining its initial strength, and building up a steady backbone of pepper. If this cigar were a symphony, the first movement would be blustery and full of vigor; the second movement would be light and airy; the third would be a thundering crescendo.

The maduro Delicias is just a couple shades darker than the natural version, but it’s just as rough hewn in appearance. The roll is firm with a slight square press. Once again, we can’t resist Jon’s description of this bad boy:

Like its natural cousin, the Delicias maduro is quite rustic in appearance. It’s toothy, its seams are defiantly visible, and its gnarled, slightly box-pressed shape will not win any beauty contests. Nevertheless, there is an enjoyable machismo on display here. This little cigar has a bit of a Napoleon complex: it’s short, but it’s rugged and ready to rumble. If this cigar has a personality, it’s that of a turn-of-the-century, bareknuckle prizefighter.

After an initially raspy burst of spice this cigar mellows into a surprisingly complex brew of earthy tobacco, coffee and sweet maduro flavors, though lucky7 thought the sweetness slightly reduced in comparison with the others we’ve reviewed for the Roundup so far. Cigarfan noticed a recurring flavor that is becoming for him the signature of Padron maduros: a sweet coconut or hazelnut flavor, but like lucky7 he found it to be a little less pronounced here. Jon described this flavor as “hazelnut, honey, and occasional notes of clove. Additionally, there’s a delightful honey-graham aroma to the smoke that is intoxicating.”

In the second stage the smoke becomes creamy smooth and the flavors subside a bit. There’s a little bit of pepper, but it’s not as powerful as the natural and the finish is much shorter. It is similarly medium-bodied, and all other construction qualities are

on par with the natural — not perfect in terms of burn, but good enough for Gentleman Jim Corbett.

The last third revisits some of the earlier peppery notes from the first section and the aroma picks up more char. Jon experienced more complexity at this point than the other reviewers did, marking coffee and cedar, while cigarfan and lucky7 found mostly strong and straightforward tobacco flavors. Once again the last third spirals down into bitterness, but less dramatically than the natural.

The Padron Delicias is not the trifle that its name would suggest — it’s a fairly potent forthright cigar that provides an hour of serious smoking. The maduro and the natural versions of this cigar have their own distinct personalities, but they share a feisty disposition. That said, our reviewers agreed that the maduro took an edge over the natural in terms of complexity, smoothness, and overall performance. Lucky7 sums it up well when he says that he “would recommend this vitola to experienced smokers who can handle full power at the nub or the medium-bodied smoker who wants to quit two-thirds of the way through.” The Delicias is no bon bon.

Thanks to JonN for contributing his insightful comments and some great prose to this comparison review. Be sure to check out his articles at StogieGuys.com — we think they’re some of the best written pieces in the business.