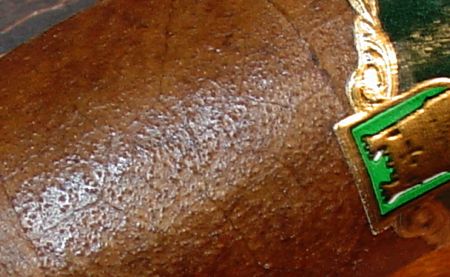 A few weeks ago when we first started the Padron Roundup we came across the term “grain,” as applied to the unusually large raised dots on many Padron cigar wrappers. In the first Roundup Post (the Padron 7000) we cited a Stogie Fresh article that seems to explain the phenomenon quite adequately.

But it was inevitable that someone should ask, “I’ve always called that tooth. How do you tell the difference between tooth and grain?”

Initially we thought that should be easy, because “grain” as we knew it was the more prominent epidermal structure we were seeing a lot on Padron wrappers, especially the maduros: the raised dots that are visible as white dots in the ash. Tooth, on the other hand, describes the rough surface of some wrapper leaves, Cameroon in particular. If they are distinct in the ash, then they must be distinct on the wrapper, right?

My first thought was, “Yes. Of course!” But then I took a closer look. First by examining the contents of my humidor, where I was not able to differentiate between what might be tooth and what might be grain, and then by digging through the literature on the subject, which is admittedly scanty.

My first discovery was that the professional literature does not always use the term “grain” in the way we have been using it. Most of the time it is used in a more general sense, as a way to refer to the texture of the leaf. For example,

“Thickness and weight per unit area of leaf are measures of body, while cell size and compactness of cell arrangement are the physical basis of grain.” ¹

In describing the effects of the fermentation process another article says there is “a change to a uniform and darker color and a grainy leaf texture.”² Clearly a general use of the term.

"Grain" in the Ash

What was more interesting is that there is a specific use of the term that does corroborate the way we have been using it. The only problem is that it comes from a paper written in 1916, a time when cigars were King. (Also a time when the U.S. Department of Agriculture supported these kinds of studies.)

Charles S. Ridgway writes that grain is composed of crystalline bodies. “On burning, these grain bodies swell and cause the pearl-like pimples so frequently seen on the ashes of cigars.” Ah ha!

Ridgway goes on to say that this grain is present in all air-cured types of tobacco, and that there are many types of grain. Interestingly, he says that the grain particles are actually what gives the tobacco its color. Most of this grain is microscopic and is usually embedded in the tissue of the leaf. But there are two exceptions to this, and these are what caught my eye:

“on dark-colored leaves of a heavy texture it may appear as raised black dots; on lighter colored leaves it appears as minute disks situated on or immediately beneath the surface on either side of the leaf.”³

Ridgway developed a way to separate the grain from the rest of the leaf components (a very tedious mechanical process requiring a binocular microscope) so he could analyze the chemical composition of the grain. He found that it was chiefly composed of calcium, with a little magnesium and potassium, in combination with citric and malic acids.

Since grain is formed during the curing and fermenting process, Ridgway proposes that the formation of macroscopic grain is caused by the breakdown of cell walls and the “disorganization of the protoplasm,” allowing the formation of minute crystals. Some of these crystals grow by a process of accretion and eventually form solid grain bodies of visible size.

Based on this I would think that of the several different types of “grain,” one in particular creates the effect that we saw in some of the Padron maduros. It makes sense that the chemical reaction responsible for producing the bright white specks in the wrapper ash is due to an unusually high level of an element like magnesium in the crystal “grain” when it burns.

In the picture below the same type of stippling is visible in the Cameroon ash, but it’s much smaller. The small toothy bumps have merely been reduced to ash, but retain their basic definition. 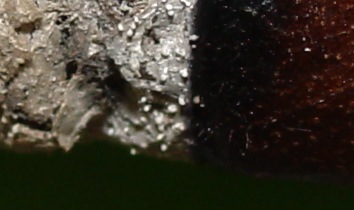 So back to the question: How can you tell the difference between grain and tooth? Well, the first problem is that the term “grain” is not a very good one because it has more than one connotation in terms of tobacco leaf texture and composition. If we take “tooth” to be general for any kind of surface texturing, and “grain” as specific to this type of stippling in the ash, the answer is this:

Those little white specks that we’ve been calling grain can only be identified after the wrapper has been reduced to ash. If they are at all visible beforehand, there is no way of differentiating them from any other kind of surface texture. The only way to tell if it’s grain is to light that sucker up and see!

7 thoughts on “Some Thoughts about Tooth and Grain”