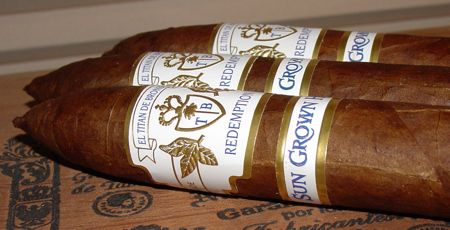 Antonio Maceo y Grajales was “El Titan de Bronce,” the Bronze Titan. Second in command of the Cuban Liberation Army, he led a comparatively small force of Cuban rebels against the formidable Spanish army during the Cuban War for Independence, slowly bleeding the Spanish of almost a quarter of a million soldiers until he himself fell in battle in 1896.  Due to his ferocity –and his Afro-Cuban complexion– he was called the Bronze Titan. 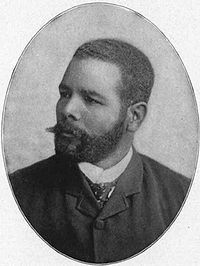 El Titan de Bronze is also a small cigar manufacturer based in Little Havana’s famous “Calle Oche” neighborhood, obviously named in honor of the famous Lieutenant General. Established in 1995, the factory is owned by Carlos Cobas, and until a short time ago his cigars could be purchased only at the store.  Level 9 cigar rollers with experience in Havana’s major factories — Partagas, Romeo y Julieta, etc. — make up the front line staff, and Pablo Romay (of La Tradicion Cubana fame) is the master blender for the shop.

Currently Titan de Bronze is producing four lines of cigars — the Gold, Maduro, Cameroon, and this one, the Redemption, which is the fullest bodied of the lot. For the Redemption, Romay wanted to create a cigar with a “medium to full body, no bitterness, and a sweet aftertaste.” To do this he utilizes a Nicaraguan blend for binder and filler coupled with an Ecuadorian Sun Grown Habano wrapper.

The Redemption line is available in four sizes in addition to the Belicoso:

Since El Titan’s torcedors are all veterans of the Cuban cigar industry, it’s no surprise that they employ Cuban-style rolling and bunching in their cigars — “entubado” bunching to ensure a good draw, and triple caps on the parejo sizes.  The result is an attractive and consistently performing smoke.

The belicoso is a squat 4.5 x 54 cigar with a firm roll and an attractively leathery wrapper. The head is perfectly formed and wrapped. The prelight smell is of grass and cedar, with some richer earthy qualities from the foot.

Lighting up the 54 ring gauge foot takes some patience, but once lit it smolders nicely. The first couple of puffs are earthy and sweet, similar to Gran Habano’s Corojo #5, and a good jolt of pepper follows. After half an inch this mellows and cedar takes over from the pepper. The ash is flaky and disintegrates when I tap it into the ashtray after an inch or so.

There is a nice amount of complexity to this cigar, with woody and caramel flavors making an appearance after the mid-point. The sweet aftertaste that the blender was seeking is definitely in evidence here, and it combines with the cedary flavors very well. The last section of the cigar gets increasingly spicy, but never biting or bitter.

The Redemption Belicoso smokes like a lighter Nicaraguan style cigar with a sweet edge to it. I didn’t find the cocoa or coffee flavors that often crop up in Nicaraguan cigars, but there’s plenty here to keep your interest for a good 45 minutes. If you’re smoking a cigar from a smaller manufacturer, it’s probably because you’re looking for something new — and the Titan de Bronze Redemption is a refreshing change from the what the big industry players are offering. And to seal the deal: MSRP runs around 5 USD for the belicoso. Very competitive for a Miami-rolled cigar.

Walt smokes the Redemption robusto for The Stogie Review.

Lisa tries the Coronita for Her Humidor.

Jesse’s take on the Belicoso for Cigar Jack.

Zen and the Art of Cigars checks out the Robusto.

My duties to country and my own political convictions are above all human effort; with these I shall reach the pedestal of freedom or I shall perish fighting for my country’s redemption.