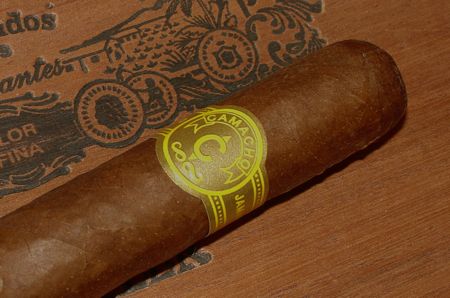 I make no apologies for being a cigar fiend, but I’m aware of the impact that fiendish behavior has on the cigar market. If it were just me and a handful of fanatics, it wouldn’t be such a problem, but it’s not. It’s you. And you. And you. The root of the problem is that cigar fiends like us are always on the prowl for a new blend, regardless of the number of sweet smokes already available. Hence old companies with reputations that have stood the test of time must needlessly reinvent themselves, trowel vanishing cream over well-earned wrinkles, test out new crops, whip up new blends, and conjure up flashy new ad campaigns.

Or sometimes, they just repackage the brand and get a new band design.

It’s hard to believe, but the Camacho Havana cigar has been around for over forty years.  I would guess that the blend has changed somewhat over that span of time, but from talking to old timers it sounds like it hasn’t changed that much. Back then it was considered more of a full than a medium-bodied cigar, but that was before the heyday of the heavyweights. By comparison with Camacho’s Corojo and Coyolar (and Triple Maduro and so on) the Havana is a sweetheart. But it’s still fairly steely when compared to the mainstream blends popular a few decades ago.

Like the majority of Camacho’s blends, this is a Honduran puro– the wrapper is a Criollo leaf from Jamastran and the innards are Honduran corojo. Available in twelve (count ’em) twelve sizes, there is a stick to match any desired duration. Today’s target is the 5 x 50 Monarca.

In 2007 the boxes were reengineered to display better on retailer’s shelves, but I’m not sure why the bands were changed. Perhaps to appeal to the short attention span of your average cigar fiend? Lookie! It’s NEW!

The new gold band surmounts a mediocre looking cigar — the wrapper is lackluster and the roll a bit lumpy, but the cap is triple wrapped and tight. After slicing off the cap with a guillotine cutter I notice the draw is free and easy. Maybe a little too much so.

The first flavors out the gate are earth with a touch of pepper. Compared to the Camacho Corojo toro I smoked last weekend, the Havana is positively friendly. There’s no fight to this guy at all — just an easy cruise down the boulevard with the top down.

To accompany the loose draw is a fast burn, but it never overheats or gets bitter. It’s just a little too quick for my liking. The ash also has a tendency to blossom — the wrapper ash curls out and either breaks off or blows away.

Midway through the cigar I notice a creamy texture to the smoke — a little unusual for this brand. The flavors are still earthy — mineral and salty notes — and the aroma is slightly sweet. I noticed this with the aged Camacho Havanas I had last year — the aroma is of mild ginger and wood. A more powerful filler blend would overwhelm these delicate elements, but there’s a fine balance here.

I wouldn’t call the Camacho Havana a terribly complex cigar, but it has enough weight and spice to keep my interest for the 30 minutes it takes to smoke one — my only complaint is that 30 minutes seems unduly short for a robusto sized cigar (for me, anyway.) I think the Corojo will remain my mainstay blend from Camacho, but the Havana is a worthy medium-bodied alternative.

Prices vary, but it looks like a box of 25 is running around 100 bucks. Eminently reasonable, and a steal at any lower price.