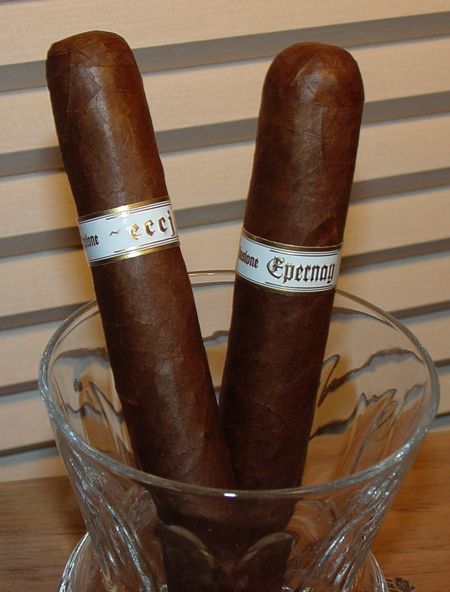 Wine and cigars.  I like them both, but not usually together because the robust flavors of black tobacco almost always conflict with the more delicate qualities of wine. It could be that I’m pairing wines of insufficient strength with full-bodied stogies, but the result in my case has been invariably the same: a wine that tastes like ash.

Dion Giolito wants to convince us that this is not always the case. His Illusione Epernay series, which was blended specifically to complement the flavors of champagne, 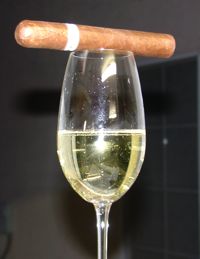 has its origins in the 15th anniversary cigar commissioned by the European Cigar Cult Journal (ECCJ).  That blend has now been expanded to four sizes and has been christened Epernay.

Since the original blend was created for European cigar aficionados, it makes sense that the Epernay series is blended for what Giolito calls the “European palate.” I’m not precisely sure what that means, but assuming  European cigar enthusiasts are smoking mostly Cuban cigars it would make sense that this is going to be a lighter, more aromatic and elegant cigar than the average Nicaraguan.

The Epernay series is like other Illusione cigars, a corojo-criollo blend of tobaccos from Nicaragua, also made in the Raices Cubanas factory in Honduras. The wrapper is a sun-grown corojo leaf described as “Cafe Rosado.”

Four sizes are available (and it looks like there are still some ECCJs floating around as well) :

When I finished tallying my scoring sheet for this cigar I found that the Epernay Le Grande achieved nearly perfect marks for construction. This is pretty rare, but this is a rare smoke. The wrapper on this cigar is not flawless, but the mostly fine veins that track through the dark golden leaf aren’t distracting in the least. The cap is wound with nearly seamless precision into a rounded head. The roll is solid and the draw is perfect. It burns slowly and evenly, leaving a solid but slightly streaky gray ash.

Since we had opened a bottle of champagne for the Thanksgiving Day festivities, I took the opportunity to smoke the Epernay along with a glass.  I was prepared to be disappointed, making sure that an alternative beverage was readily at hand.

The Epernay Le Grande opens with a mildly acidic zing familiar to those who smoke Nicaraguan corojo-criollo blends. After half a dozen puffs I hesitatingly tipped the glass to my lips and fully expected the wine to taste tainted. But it did not — the zing of the tobacco actually blends with the carbonization and the tannins in the wine! The flavors of the champagne weren’t affected at all, at least not yet.  In the first third the smoke itself is buttery smooth with some cedar and something like toast. The flavor is mild enough to pair well with the champagne, but the smoke texture is closer to medium-bodied.

Some tartness enters in the middle section, but it is nicely balanced by the woody sweetness on the nose —  the smoke leaves an oaky impression, a little tannic with a touch of honey. (I have to wonder how much of this is attributable to the champagne.) The finish is pleasant but has a salty tang.

The final third tastes more like a traditional Illusione blend — the familiar flavors of cocoa bean with a smattering of black pepper. At this point the smoke seems to interfere with the champagne, but the bottle had already been drained by my thirsty guests anyway. I was more than content to finish this cigar with coffee after bidding the oenophiles good night.

The Epernay Le Grande is an even-tempered, medium body cigar with a lot of class and a good deal of refinement. It also had nearly perfect construction — probably the best of any cigar I’ve smoked this year, scoring 49 out of 50 points. The cigar it reminded me of the most was Tatuaje’s Cabaiguan — perhaps because the Epernay stands in the same relation to Illusione’s original line that Cabaiguan stands to Tatuaje — it’s a mellower, more subtle, but equally complex cigar.

And it does in fact complement champagne; I’ll be interested to see if it can pair up with other types of wine as well. This could be the start of a beautiful friendship.

Illusione’s Epernay line is only available cabs of 50, but individual sticks retail for around 8 to 9 USD per stick. A little pricey, but definitely worth the experience.