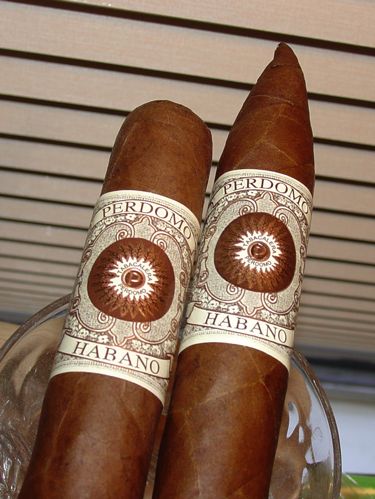 My first thought when I came across the Perdomo Habano in maduro was that it was strangely named. It’s a habano, but it’s also maduro? Well, yes, it is. It’s both. The term “habano” is used so loosely in the industry that there’s bound to be some confusion.

This confusion comes from the fact that some cigar makers issue the same blend in either maduro or “habano” wrappers. The problem here is that in one case the wrapper description refers to the processing (maduro) and in the other case it refers to the seed-type (habano.)

Generally speaking, “habano” is just another word for tobacco grown from cuban seed.  Needless to say, this covers a whole lot of cigar tobacco that isn’t necessarity identified as “habano.”  The Padrón family grows one type of cuban-seed tobacco on their farms in Nicaragua. If asked, they call it habano, but it’s not advertised that way. (As if Padrón needed to advertise.)

This is why Perdomo can issue a single blend with three different wrappers, and call them all Habano. Because in this case “habano” is not just a wrapper type, it’s a seed-type.

Perdomo’s Habano line was introduced in 2007 in two varieties: Corojo and Maduro. Both are cuban-seed (habano) tobaccos grown in Nicaragua. To compound our confusion, Perdomo released the Habano Connecticut (with a non-habano, Connecticut-seed shade wrapper) in 2008. In this case, all but the wrapper is actually habano.

Cuban-seed tobaccos from the three major growing regions of Nicaragua form the heart of the Perdomo Habano. Tobaccos grown in Esteli, Condega, and the Jalapa Valley all have their own distinct qualities, and here they are blended to make the best use of them.

Color-coded foot bands indicate which wrapper type is used — gold for Connecticut, platinum for maduro, and bronze for corojo.

Seven sizes are currently in production:

The Perdomo Habano Corojo is an attractive cigar featuring a smooth wrapper with a slight sheen. The torpedo is wrapped very nicely and comes to a sharp point that skews a bit off-center. The robusto has a solid, well-shaped head, but the cap is pasted on without regard for aesthetics. In both cases the roll is somewhat irregular with a soft spot found here and there.

The pre-light draw is excellent, but a few inches into the stick I found it to be a little too loose. Both sticks burn evenly and produce a blooming ash that holds well but doesn’t inspire much confidence. I let the torpedo rest in the ashtray for only a couple minutes and the cinder cooled to the point where I had to relight.

Overall good, but not great, construction.

This blend opens boldly with a good belt of spice on the tongue and the upper palate.  After a minute or so it backs down a little and relaxes into leather with soft cocoa notes. The smoke is smooth, but has a sharply acidic aftertaste.

In the middle section the flavors gradually get a little darker, but don’t change too much. The cocoa notes stretch out and take on a mocha-like quality, and the leather stays leathery. I generally expect a caramel sweetness on the nose from corojo, but I’m not getting it here. The aroma is heavy, but pleasant. Unfortunately I don’t find it all that interesting.

The last section is laden with leather and spice and a truckload of nicotine. The smoke texture is medium-bodied, but it’s powerful and biting. The aftertaste is heavy with earth and char and the finish is off the chart. Like many full-flavored cigars, the last third is lacking in subtlety. I lost interest close to the band, and it’s a large band.

I’ve smoked the Habano Maduro in the past, and I have to say I like it quite a bit more than the Corojo. There’s plenty of leather and spice to the Corojo, but it lays it on a little too thick for my taste. That said, it’s still well built premium smoke. It’s just a little outside my preferred flavor profile.

The Perdomo Habano lines average around 5 USD per stick or 100 per box of twenty. If you dig leathery sluggers like the Camacho Corojo or LFD Coronado, you might get a bang out of this one. The price is certainly right.