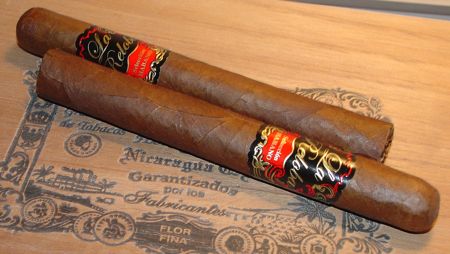 In Cuba, La Reloba is a well known “peso” cigar, which is what the locals smoke. Peso cigars are more or less like bundled cigars: they are economical unbanded cigars sold in mazos, and they cost around one Cuban peso each. Hence, peso cigar. Cigars for export are generally too expensive for the average Cuban citizen. Come to think of it, Cuban cigars are too expensive for the average American these days as well, which is perhaps what gave My Father Cigars the inspiration to release this economical blend.

Released to little fanfare in April of this year, La Reloba is a Nicaraguan puro available in both Habano and Sumatra wrappers. The press on this cigar has been minimal. I think I saw one paragraph in CA that said, in essence, “Pepin releases cheap smoke” and that’s about it. If nothing else, the diffidence of the mainstream media is nice for the legion of cigar bloggers and our brothers and sisters on the cigar boards who will thereby exercise greater influence on the market. (Think positive, guys.)

La Reloba is a nice looking stick, as one would expect from My Father Cigars. The wrapper is a smooth colorado maduro with a slight sheen, otherwise marred only by a few unobtrusive veins. The roll is solid and the caps are of course triple-wound. The draw is firm, but not tight, and the burn is even. The coronas I’ve been smoking build a long and handsome ash.

The corona opens up with a woody flavor and that trademark Pepin overture — lip smacking tannin and a blast of black pepper. It’s actually pretty restrained compared to higher end smokes from My Father Cigars, but there’s still no mistaking that you’re smoking a Nicaraguan puro.

After an inch or so the spice backs off and the flavor becomes a little more basic: cedar, toasted tobacco flavors, and a touch of cocoa on the nose. The aroma is not as complex as you’d find in the Black Label or the Series JJ, but it’s nothing to sneeze at either.

After mellowing in the mid-section, the final third turns up the heat, stoking the fires with hard wood and another dose of pepper. It gets a little aggressive at the band, but again, not in the way Pepin’s heavy hitters do.

When I feel like a medium-bodied Nicaraguan puro in the Pepin style I usually reach for a Vegas Cubanas or a Tatuaje Havana, and I think either of those would surpass La Reloba in a blind taste test.  But one of the most attractive details about La Reloba is the price: the coronas retail for around $4.50 a pop and the torpedos top out around $6.50. That’s outstanding for this level of quality, so the price can not be left out of the equation.

La Reloba is an extremely well constructed cigar available at an excellent price. And while it’s a fine cigar, it’s not as complex as higher-end brands from the same outfit. I think most of us have a balance in our collection between higher priced, complex, gourmet cigars and everyday, affordable, decent smokes. This is one to consider for the everyday job.

One thought on “La Reloba Habano”