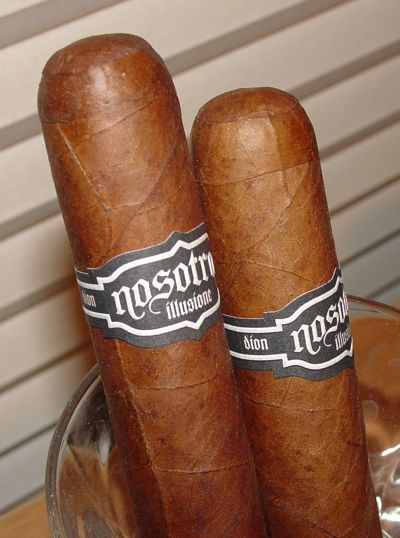 By now most have heard that the Nosotros cigar, a joint product of Illusione and Drew Estates, is no more. There were production issues from the start, and evidently they didn’t improve. But that’s no reason not to complain.

I’ve never met an Illusione cigar I didn’t like, so I was expecting great things from Nosotros. What I found was a cigar that may have some serious consistency problems.

A mostly Nicaraguan blend with an Aganorsa wrapper leaf, a true Connecticut Habano binder, and Oliva ASP filler, Nosotros is (or was) made in the Drew Estates factory in Nicaragua. While somewhat notorious for their flavored ACID cigars, Drew Estates is now doing quite well with traditional blends, so the collaboration with Illusione was not completely out of left field.

I was told by several people that the new release was a bit green and could use some extra time in the box, so I let the few robustos that I acquired in the spring relax over the summer for a big fall debut.

The first robusto that I fired up was a maddening experience. It started out with a tough draw, but one I felt I could fight through. The smoke was flavorful, woody with some sharp spices, but the wrapper wouldn’t burn. After about half an inch the flavor turned sharp and thin, and after staring quizzically down the business end of the cigar I realized it was tunneling.

The only remedy I’ve been able to find for tunneling is to let the cigar extinguish itself, cool off a bit, and then amputate the offending extremity. Then, starting over with a fresh stump, hope for the best. When I cut the cigar I could see that the tobacco around the binder was booked, and the center core looked loose, as if a leaf were missing. Clearly this was a bad bunch. I tried to smoke it again, but what I got was sharp, hot, and sour.

Disgusted and disappointed, I returned to the humidor and found a Rocky Patel Sungrown to soothe my frayed nerves.

One cigar does not make or break a blend in my book, so several days later I decided to give the Nosotros another go. This one was much better.

The wrapper is grainy and the cap is unusual. It looks like a single wrap with a circular slice of the leaf fixed on top. The draw on both samples was a bit tight, but not to the point of despair. And aside from the obvious burn problems with the faulty stick, the good one was still problematic — without frequent puffing, which is not my style, it went out entirely and had to be re-lit.

The best qualities of this cigar are very similar to the best qualities of Illusione.  It has a woody foundation, but it’s not the typical cedar flavor found in so many cigars — it’s more like hardwood than cedar or pine. The aroma enhances this flavor with something like sweet hickory.

Black pepper makes an appearance in the first stage, along with some cereal type flavors and straightforward bright virginia-style tobacco. The cigar gradually gets smoother, offering up balanced flavor and a medium body.

Nosotros isn’t as crisp and clean tasting as Illusione, but there is an additional dimension to the blend that makes it very distinct. There is another bass note in there somewhere which makes this cigar a little more complex.

I was finishing this cigar without any further construction problems when I lurched from my chair and discovered a serious, but silent, nicotine payload. This is a fairly potent cigar but it doesn’t have the swagger of one. That I like.

I am ambivalent about this cigar, which is okay I guess because it is no longer being made. Of the two I smoked, one was a complete disaster, and the other demonstrated middling construction. But the flavors, when I could get them, were interesting, balanced, and quite pleasant.

Bottom line: I liked the blend, but not the construction, and one fails without the other. At around USD 9 per single cigar, I think I’ll pass on Nosotros. 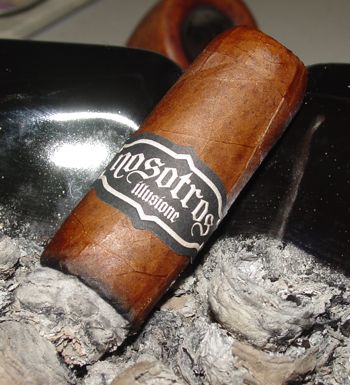