So what’s up with Cigars International and Padilla? In the past few months we’ve seen a number of “small batch” and “limited” edition Padillas for sale at prices so low it should be illegal. I reviewed the Miami Maduro limited edition a few weeks ago and found it to be a decent smoke — even a very good one, considering the price. In the meantime I’ve smoked all of the other small batch sticks and thought they were decent as well — not stellar, but better than their two-dollar price tag would suggest.

So when I saw the Padilla 1948 getting the same treatment, I jumped. The ’48 was my goto Padilla back when Pepin was making this stick, so at 40 bucks for a mazo of 20 it seemed like a no-brainer.

But then I read on one of the boards that this cigar uses short filler. This was after I had pulled the trigger, of course, but I was a little peeved because the description of the cigar specifically stated it was long-filler. On the other hand, what do you expect for 2 dollars? I decided that I should postpone judgement until I could perform a little personal investigation.

According to CI, this is a long-filler Nicaraguan puro with a Habano wrapper. Like the Miami Maduro Edicion Limitada, this one is issued in the 5 x 50 robusto size only.

The first one I smoked burned well and tasted fine up to the mid-point where it suddenly got very sharp tasting. But what really concerned me was the ash. After half an inch it plummeted to the floor without the slightest prompting. And then again, after another half-inch or so. Damn, I thought. This probably is short filler. To satisfy my curiosity, and for the benefit of my three readers, I had to conduct a post-mortem. The results weren’t pretty, and I like pretty pictures, so I sacrificed a fresh stick for the purposes of demonstration.

Below you can see the wrapper, carefully incised and removed. It’s a nice looking wrapper — dark and oily, just like the ad copy says. 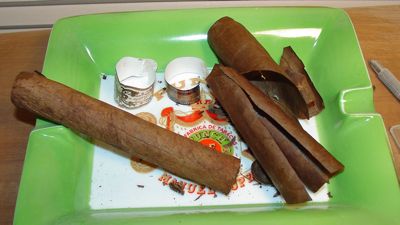 Next, the binder. Not so nice looking, but neither is your connective tissue.

And finally, the heart of the issue. La Tripa. Findings: Long Filler. 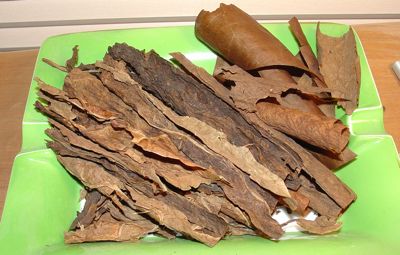 The biggest problem with this cut-rate ’48 is consistency in construction. Some of them draw perfectly but a few were almost plugged. One had the odd ash issue, mentioned above, which resulted in the ash falling unaccountably every half-inch. But most of them (4 out of 5, lets say) were just fine.

The wrapper on this limitada robusto is rustic, but still rich looking. The roll is solid, and every one has burned slowly and evenly. The caps are uniformly sloppy, which is a surprise to see next to a Padilla band, but aesthetics aside they perform their assigned function. The ash holds firm, though sometimes it cracks and makes idle threats.

Overall construction: Good, but with concerns about consistency.

The Padilla ’48 Edicion Limitada doesn’t have the smoothness or complexity of the ’48 I remember from back in the Pepin days, but it showcases cocoa in a way that is reminiscent of the old blend. There is a little bit of black pepper up front, but the base flavors are earth and wood. Toward the middle of the cigar it picks up a musky note, but the best thing about the cigar is the cocoa and coffee on the nose. It’s about medium in body, lighter than most of Padilla’s standard lines.

I have had trouble getting past the band on these because the flavor drops off and turns ashy if smoked too quickly. If I had the time to nurse it I’d probably get more out this robusto, but for 2 dollars I’m content to smoke it halfway and grab another if I have the time.

The wrapper on this cigar is quite good, lending a cocoa-coffee base to the smoke that seals the deal. Granted, it’s not a Trump-sized deal. But what do you expect for 2 bucks a stick?

You could do worse.