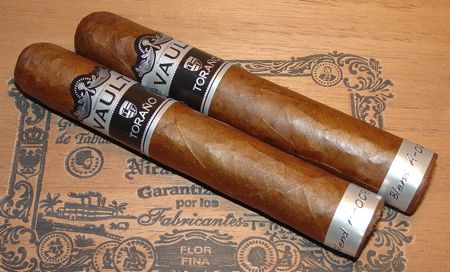 One of the reasons I’ve always liked Toraño Cigars is that they have the consistency I expect from a large manufacturer, but they frequently take chances on inventive new blends. The Single Region (which garnered a spot on my Top Ten list last year) is one of those — a cigar made entirely with tobacco from one small region of Nicaragua.

Toraño’s Vault is almost a Nicaraguan puro (it includes a binder from Jamastran, just north of Nicaragua in Honduras) and is quite a bit more geographically diverse than the Single Region, but it shows the same kind of ingenuity. It’s also a much heavier cigar than the Single Region. In fact, it’s supposedly one of the heaviest blends Toraño has developed thus far. The name of the cigar comes from the safe which houses Toraño’s “blend book,” a history of every blend developed by the Toraños since 1982. Some of these have been commercially released, and others never made it to production.

One of the blends that fell to the wayside was the Liga A-008, which was first created in 2000. The original recipe utilized fillers from Condega and Esteli, a Jamastran binder, and a shade grown Nicaraguan binder. For the Vault, the Toraños tweaked the blend by adding some peppery ligero from the volcanic soil of Ometepe island in Lake Nicaragua. A binder from Ometepe was added to the Jamastran, and some Ometepe ligero was folded into the filler.

The Vault was released in 2011 in three sizes:

The Vault robusto is a solid, well-rolled stick with a glossy, dark colorado maduro wrapper. (It looks too dark to be shade grown, but that must be the variety or the aging process at work.) The head is flat and the cap is functional. It clips crisply and the draw is easy.

The cigar burns very slowly, perhaps due to the relatively high ligero content, but with no diminution of smoke volume. I needed to touch up the burn once or twice, but it wasn’t really problematic. The ash flakes a little, but it’s as solid as the roll.

The Vault robusto comes jumping out of the gate with pepper on the palate and a bite on the tongue. This seems to be the norm for medium-to-full bodied Nicaraguan cigars these days, and the Vault is no exception. The spice is accompanied by an aroma of grilled meat and a touch of caramelized sugar.

The flavors are tempered a bit as the sharpness of the pepper fades in the middle section. The meaty tones in the aroma turn leathery but the sugary note remains. The smoke is medium in body but full in flavor and potency.

There are no big surprises in the last lap. The pepper returns, as expected, but it doesn’t drown out the other flavors as it tends to do in the first inch. The sweetness fades, but the pepper and leather lingers in the aftertaste.

I would be interested to see what the original Liga A-008 tasted like, because I think the Ometepe might be a little bit overdone in the Vault. It’s still a nicely balanced, full-flavored cigar, but it’s a bit sharp and a little less complex than I would like. A few more months in the box might serve these cigars well, unless you’re after that big spicy flavor — and of course there are a lot of folks who want exactly that. If that’s your preference, the Vault should be on your shopping list now rather than later.