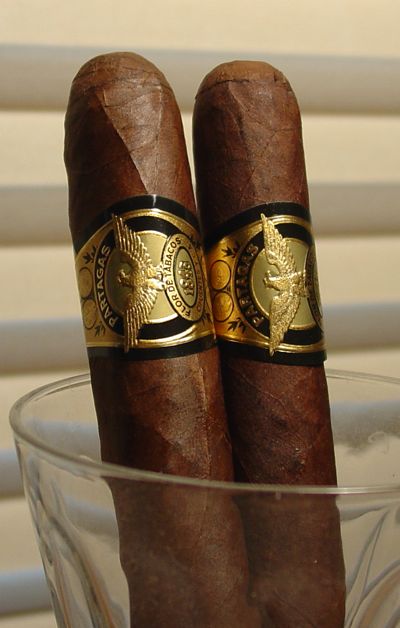 I have been eagerly awaiting the second coming of the Benji Menendez Partagas Master Series, but my patience has yet to be rewarded. While my vigil continues, General has kept Benji busy on another Partagas project, one with a view to the future. Benji’s role in the creation of the Partagas 1845 was more as a mentor than a blender, but this may be even more important than the creation of a new cigar.

The fine art of cigar blending is not exactly endangered, but with all of the dark forces arrayed against the cigar industry I am happy to see the elder craftsmen passing the torch lighter. Benji puts it simply: the goal is “to help the next generation of cigar masters create new cigars and grow in the business. If I can plant a seed in their minds so they can grow a tree, I am happy.”

The Partagas 1845 was designed to sit in between the classic Partagas blend with the Cameroon wrapper and the full-bodied Partagas Black. Not too soft, not too hard. It’s the Goldilocks blend. (…cigarfan is available for brand name and marketing advice. Also children’s parties.)

The blend is sophisticated and unusual. Starting with the core of the cigar, there is Dominican piloto cubano and tobaccos from three different areas of Nicaragua. Some of these leaves have been aged in Dominican rum barrels, and about half-way through the cigar I found this really shows. The binder is a Habano strain grown in Connecticut, and the cigar is topped off with another Habano leaf, a Viso grade leaf grown in Ecuador.

The 1845 made its debut a couple months ago in the following sizes:

Construction Notes
The Ecuadorian wrapper on the 1845 is dark, veiny, and somewhat ruddy, but it’s oily enough to give it a rich rather than a rustic appearance.  The wrapper is also quite thin, revealing the binder and giving the stick a bumpy appearance. The roll is a bit soft, but the draw is excellent and the burn is even for the most part. I had to touch up the burn occasionally for cosmetic reasons, but that probably wasn’t necessary. The head is finished with an eye to functionality, as is generally the case with General Cigars. The ash is dark but solid.
Overall construction very good.

I sampled this blend in all four sizes and found the smaller ones to be more concentrated in flavor, though not quite as smooth as the larger ones. The core flavors were the same, though they seemed to emerge at different stages depending on the size of the cigar.

The primary flavor of the Partagas 1845 is of sweet tangy wood, a flavor that reminded me at times of barbeque. This flavor becomes evident almost immediately in the Corona Extra, but it is a later development in the larger formats.

The larger sizes open with a mildly earthy, grass-like sweetness, whereas the smaller ones began with a woodier flavor. The smoke is somewhat dry and carries an acidic quality that I associate with Nicaraguan tobaccos. There is a touch of pepper, but it is employed here the way spices should be — as accents rather than entrees.

By the mid-point the 1845 picks up some leathery hints but the sweetness lingers on the nose. At this point there is a mildly liqeuer-ish, fruity quality to the flavor that might be a result of the the rum-barrel aging. I noticed this flavor in all four sizes (though at different stages) so it’s either a very consistent figment of my imagination or it’s there by the blender’s design.

The flavors darken a bit in the last third, charring at the band. The body remains in the medium range and even at the end the cigar is only moderately powerful. It has more heft than the Cameroon-wrapped “yellow box” Partagas, but it is also lighter (and much better, in my opinion) than the Partagas Black. But the flavor and style of the 1845 bear no similarity to its brand brothers, so the comparison is rather fruitless.

The Partagas 1845 is a fine medium-bodied cigar with a delicious aroma, but it suffers a bit from a lack of complexity. I preferred the runt of the litter here — the Corona Extra — for its concentration of flavors, even if it did get slightly abrasive in the last third.

Standard retail price for this line runs from $6.00 for the corona up to $7.50 for the double corona. If that’s in your everyday price range, this could be your everyday smoke.

Special thanks to General Cigar for providing samples.