New for 2012 from My Family Cigars in Esteli, Nicaragua, is Flor de las Antillas. The “flower” of the Antilles is the island from which the Garcia family hails: Cuba itself. The brand name was in fact an old Havana trademark, and My Family Cigars has resurrected the name and rejuvenated the artwork for this new release.

Construction Notes
The Flor de las Antillas robusto is a pressed cigar with a dry colorado claro wrapper. The cover leaf has a few veins, but it doesn’t look quite as weather-beaten as some sun grown wrappers. The head terminates in a flat triple-wrapped cap, and the draw is effortless. It burns evenly, and the ash it generates is almost as strong as the original cigar.
Overall construction: Superb. (No surprise, coming from My Father.) 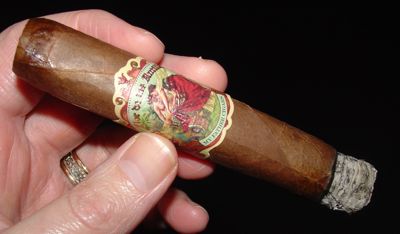 This is a somewhat unusual entry from the Garcias; it’s one of the smoothest and creamiest cigars I can recall from a cigar maker reknowned for big flavors and an explosion of pepper up front. A little bit of pepper creeps up in the sinuses for the first minute or two, but there is no bite on the tongue at all. Some leathery scents emerge which balance nicely with mild cedary spices, but for the most part this is just a very smooth medium-bodied cigar with a creamy smoke texture.

The middle section continues along the same trajectory, with some caramel sweetness added into the mix. This aroma doesn’t seem quite as robust as the Corojo 99 that I love on medium-bodied Garcia cigars like Vegas Cubanas, but it’s a little more complex and similarly balanced with mild spice.

The last third is increasingly peppery, but compared to many of My Father’s full-bodied blends (like Le Bijou, for instance) it’s really quite tame. Most of the spice tingles in the sinuses with only a fleeting nip on the tongue.

La Flor de las Antillas fills a spot in the medium-bodied lineup for My Father Cigars, perhaps to fill vacancies left by blends like El Rey de Los Habanos and El Centurion. It’s a nicely balanced cigar with hints of leather and cedar topped off with some caramel sweetness, and only a shadow of the pepper that is the hallmark of this Nicaraguan family. It’s also priced well. At around $6.00 it’s well within the median price range for premium smokes.

It didn’t blow me into the stratosphere, but smokers who like medium-bodied Nicaraguan blends — like Vegas Cubana or the old Padilla 1948 — should definitely check this one out.