When the limited edition Avo Compañero was released in 2009, iconic spokesman Avo Uvezian declared it “the best blend ever released under my name from the Occidental Kelner Cigars factory in the Dominican Republic.” Avo lovers look forward to Uvezian’s annual limited edition releases, and the Companero seemed to garner more praise and excitement than many previous years’ entries. Most Avo cigars tend to be like Davidoff blends: milder, more subtle, and a little more “exclusive” than what is generally found in my humidor. But the Compañero stands out, with many calling it the strongest, if not the best Avo yet.

The Avo Heritage is based on the Compañero blend, perhaps inspired by the popularity of its proud progenitor, or perhaps to fill out the Avo portfolio with a heavier cigar. It uses the same wrapper leaf, a dark Ecuadorian Habano, and for punch the filler includes three different Dominican ligero leaves. The core of the cigar is buttressed with seco leaves from the Dominican Republic as well as Peru, and the bunch is bound with a San Vicente leaf, also from the DR. The cigar was released in the summer of 2010, and is available in four sizes:

It’s safe to assume quality construction from this factory, and the Avo Heritage Robusto holds no surprises in that regard. The wrapper is a dark and smooth colorado maduro with a touch of oil. The head is finished with a simple but elegant single cap.  The roll is firm, the draw is effortless, and it burns with a slow and even disposition.

A well made cigar draws no attention to its behavior. In that respect this one is practically invisible.

The Heritage robusto starts up with an herbal, grassy flavor overlaid with oak. There is a peppery aftertaste, and the finish is dry. A complex aroma with notes of vanilla, or even coconut, blends well with the earthier flavors on the palate.

As the cigar develops it picks up some maduro-like flavors: chocolate notes pop up amidst the grassy, mustier flavors. From the ad copy I was expecting a heavier cigar, but I found it to be medium in body and only slightly punchier than the Domaine Avo.

The last stage gives the pepper mill a few more cranks, but even with the spice and the char it remains balanced and smooth.

Avo’s Heritage Robusto is a fine cigar, though a little too dry and grassy for me. It’s smooth, it offers a complex aroma, and is rather affordable, for an Avo anyway — MSRP ranges around $7.00 USD per cigar.

The Heritage Robusto earned a nearly perfect construction score, and if you’re a fan of peppery Dominican cigars (and have exceptional taste) you’ll want to try this one. But given my dilatory posting habits, you probably already have. 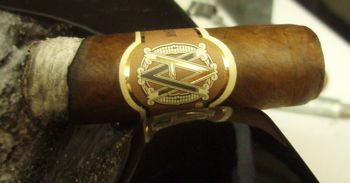