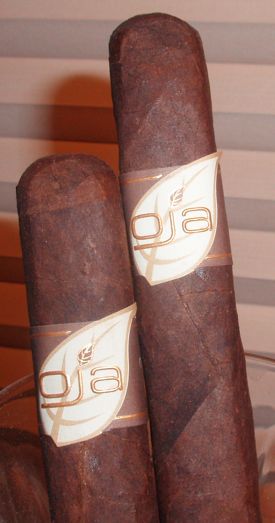 Oja cigars are a relatively new boutique blend created by Luis Garcia and manufactured by Kiki Berger (of Cuban Crafters fame) in Esteli, Nicaragua. There are three standard lines: the Connecticut (with an Ecuadorian wrapper), Mestizo (Habano 2000) and Oscuro (Brazilian Arapiraca.)

But no cigar brand, no matter how young, is complete without an Anniversary blend. I came across Oja’s Anniversary line a few months ago and after purchasing a pair at the B&M, I decided to let them sit for a while. Sometimes a cigar wants some time to ruminate, and I thought these bad boys with the refined band needed to contemplate existence for a while.

The time seems to have served them in good stead. The blend is designed for strength, with a double helping of Nicaraguan ligero in the filler, a Nicaraguan binder, and a Brazilian wrapper of the “Samba” variety. I have never heard of Samba, but whatever it is, I like it.

It looks like the Oja Anniversary is still in production, but it is not exactly easy to find. Three sizes were designed for the Anniversary blend:

The Oja anniversary Atrevido is a square pressed robusto with a dark and dry wrapper leaf. Brazilian Samba looks a lot like broadleaf maduro, but to me it seems a bit sweeter. The head of the cigar is formed well, but the cap is a little messy. The draw is excellent, and it burns quite evenly, which is notable for a pressed stick. 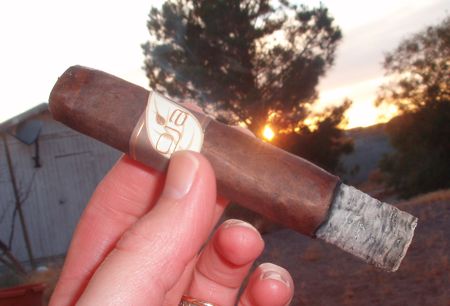 The Oja Anniversary isn’t a cigar that evolves too much, but it is balanced and the flavors are complex enough to keep my interest despite the lack of transition flavors. This cigar offers what I associate with great maduro cigars — rich and earthy flavors on the palate with overtones of chocolate and dark-roasted coffee on the nose.

Also present is a woody sweetness that I generally associate with Nicaraguan tobacco. The smoke is slightly tart on the tongue, and a touch of acidity gets the juices flowing. The flavors complement each other nicely and blend well.

I was expecting a little more spice in the finale, but it remains pleasantly balanced to the end. Some char and a dash of pepper appear at the end to wave goodbye.

I like full-bodied cigars, but I like them especially when the smoke is as creamy and smooth as this one is. A full-bodied cigar, in my opinion, does not have to scorch your tongue off with spice or turn your stomach with nicotine. And the Oja Anniversary does neither, while remaining a substantial and flavorful smoke.

It’s not a sophisticated cigar, but it’s finely balanced and tasty. It’s exactly what I look for in a top tier maduro — it’s smooth, with layers of chocolate, dark roasted coffee, and a sweet earthy aroma that makes my garage smell just like… my garage. 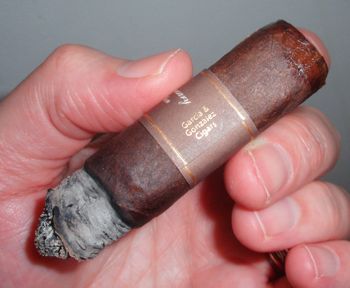