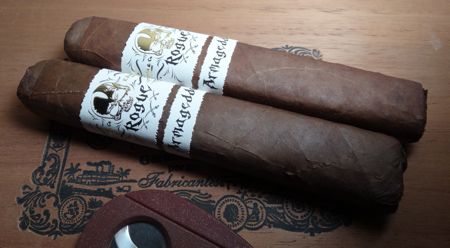 It is becoming de rigeur for cigar companies to have at least one ligero-heavy shillelagh in their portfolio. It should be big, heavy, and the packaging imagery should look like something out of Game of Thrones: some medieval-looking daggers, Renaissance Faire heraldry, gothic lettering, and a band emblazoned with a cranium of one sort or another. It should also have a name like Ogre or Sarcophagus.

Released under the East India Trading Company, Rogue is one of Gurkha’s more potent blends. And wouldn’t you know, on the band there’s a gleaming skull. How about that?
The wrapper is a dark Ecuadorian Habano leaf, the binder is from Ecuador as well (which is sort of unusual), but the core of the cigar is where the beast lurks — a blend of ligero from Nicaragua, Honduras, and the DR. Let’s get ready to rrrrrrrrrumble!

Five sizes are in production:

The folks at Gurkha must have a good sense of humor because they sent me a sample of the Rogue in the Armageddon size — 6 x 66. 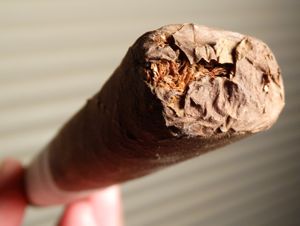 To make matters even more extreme, the cigar is square pressed. This is a gobstobber of a smoke, and a good one to punch, because a standard sized cigar cutter is just barely up to the task. The cap is a little questionable anyway.

The wrapper is dark maduro in color — habano oscuro seems to be very popular these days — and is fairly thin. The cigar cuts well, and takes a punch even better, but the draw is extremely airy. This may be by design, due to the high ligero content. The foot of the cigar is unfinished, which might be why it takes a light so easily.  It burns well and produces an adequate volume of smoke, but the loose draw is a little off-putting. Perhaps it takes some getting used to.

The Armageddon does not begin with the pealing of trumpets or the cataclysm of brimstone and black pepper that I was expecting. It’s much smoother than the end of the world,  so perhaps T.S. Eliot was right when he said the world ends “not with a bang, but a whimper.” Maybe it ends with a pleasant aroma of coffee and roasted nuts.

The body of this Rogue is also surprisingly light. As with the Cain Daytona, the high ligero content of the cigar lends it a wispy feel on the palate without sacrificing any power. Despite its lack of “mouth feel” the cigar is still quite strong. It’s also pretty tasty. There is enough pepper in the first inch to keep the ligero-heads happy, but it’s not out of balance. At the mid-point earth and minerals form the base flavor of the cigar.

The cigar grows in strength and the aftertaste becomes overwhelmingly earthy by the time the ash meets the first band. By this time I’ve had enough, to be honest, but those with a higher nicotine tolerance and a penchant for char might continue on.

The Rogue Armageddon is a monster smoke, but it is not as evil as it appears. It’s smoother and more complex than I expected; on the other hand, the loose draw was an issue. At around $10 USD per stick, it’s not an economy cigar, but I might test drive one of the smaller sizes at a proportionally lower price point. If the Rascal has the same flavor as the Armageddon in a smaller package, it could be a killer corona. 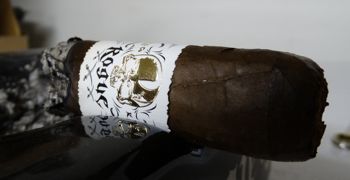