Preferidos have been rolled and sold for a long time now. Since 1903, to be exact, with some production interruptions for things like world wars, revolutions, global depressions, and that sort of thing, and I expect that the blend is bit different now than it was in Teddy Roosevelt’s day. Currently there are six blends in this La Aurora line, including the newest Diamond Preferido made with a Connecticut Broadleaf wrapper. But as usual I am lagging far behind the vanguard, taking the time to smell the pilones, so I’m going to take a look at the Ecuador blend which has been out for several years now. (An historical sidenote: the Aurora Preferidos Emerald was selected the 7th best cigar of the year in 2006 by Cigar Aficionado magazine.)

Preferidos in the wild are most frequently found living in shiny zeppelin-shaped tubes, and this one normally comes in a green one denominated “Emerald.”  This one was farm-raised, however, and caught on C-bid for less than half the standard retail price, so no tube. I must admit to one lingering concern about the identity of this cigar — the band reads ECUADOR, rather than EMERALD, as it does on the wild-caught tubed variety. Is the blend the same? I haven’t found any information to the contrary, but I can’t say for sure.

The wrapper is unsurprisingly from Ecuador, grown from Sumatra seed. The binder is Dominican, and the filler is a blend of Dominican, Brazilian, and Nicaraguan leaves. How they get all those into this little double-perfecto is a mystery to me, but La Aurora assigns only their most talented (and tourist-friendly) torcedors to the Preferidos line, so they get it done somehow.

Preferidos perfectos are produced in two sizes: this one, the classic 5 x 52 No. 2, and also a larger No. 1, at 6 x 58. A few are made in parejo vitolas as well, including robusto, lancero, and most recently a corona size.

The Preferidos Ecuador No. 2 is a small double perfecto with two wrapped ends. The foot of the cigar is open, but some smokers like to trim a bit more off to create a slightly larger landing pad for the flame. The wrapper is slightly oily but otherwise unrefined: colorado maduro in color with the widely spaced veins typical of Ecuadorian wrapper leaf.  The roll is solid, and the draw is good. Without opening up the foot a little more it can be tough to get lit, but the patient puffer will find this is not necessary.

It’s not the size of the dog in the fight, as they say… and this little mutt has more bite than I expected. Both ends of the cigar are marked by loads of black pepper. The first part offers some leathery flavors and a hearty meatiness, but the best part  is a transitional sweet spot right in the middle of the bulb where the pepper gives way to dark chocolate on the palate and a spicy oak-and-vanilla aroma. Unfortunately the crest of this wave is only momentary and then it’s a quick descent back into black pepper, even more pronounced and one-dimensional on the back end.

Compared with other Preferido blends the Ecuadorian entry is a ruffian. Particularly compared to the Cameroon, or even the Corojo, which has potency on display but a little more sophistication. If only that mid-point highlight of chocolate, oak, and pepper could be extended throughout the cigar, I might be won over. Alas and alack, ’twas not to be. And with an MSRP of around $9 to 10 USD, ’twill not be again. 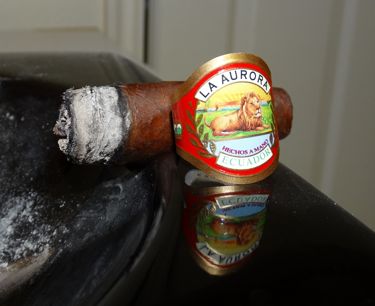