Someday I hope that I can start a review with a story about a burgeoning cigar star who was raised in the Cuban cigar tradition and never had to leave his homeland. But that story is not yet ready to be told. So the story of Noel Rojas will sound familiar: after working in the fields of Pinar del Rio from a young age and building a solid reserve of knowledge and experience in the Cuban cigar industry he discovered, like so many others, that he would have to leave Cuba to succeed.

Rojas followed in the footsteps of many other talented cigar makers and made his way to Nicaragua. With advice from luminaries like Arsenio Ramos, Rojas began to build his own business, even turning his house into a factory and storage facility when he had no alternative. Today he operates his own factory, Aromas de Jalapa, in Esteli, Nicaragua, and has several lines in production, most notably Guayacan. (He also makes one of the best cigars I smoked last year: Draig Cayuquero.)

Sabor de Esteli was introduced at the IPCPR in 2014 and is also available in a natural Ecuadorian Habano. The Maduro presented here utilizes a Mexican wrapper from the San Andres valley, along with filler and binder leaves from Esteli. It is a telling feature of the cigar that there is no seco or volado leaf in the blend — the filler blend is viso and ligero only. Four sizes are in production:

The Sabor de Esteli Maduro is a pressed cigar, which distinguishes it from its conventionally round sibling in the natural wrapper. The San Andres wrapper is smooth and consistent in color — not pitch black, but definitely well matured. The head of the cigar is well formed, even if the cap is a finished a little roughly. The roll seems a little loose, but the draw is not too easy and the even burn produces a strangely lightweight, but solid ash.

The maduro characteristics of this cigar are apparent from the start: bittersweet chocolate is the flavor that rarely wavers here. The smoke is smooth and creamy, but the peppery spice that opens up in the nose and gradually moves to the palate adds a dimension of complexity to the smooth waves of chocolate rising from the wrapper.

In the mid-section the pepper eases up a bit while the tannins bear down on the palate. Milder aromatics come forward as the spice dissipates: cedar and coffee predominate, but there is some fruity sweetness here as well.

The last third of the cigar becomes earthier. The tannins are heavy and become a little cloying, but the aromatics are good to the last whiff. The body of the cigar is a satisfying medium and the strength moves from medium to full at the conclusion.

With no seco or volado in this cigar, I was expecting Sabor de Esteli to be a much more potent smoke. It’s not a lightweight by any means, but it’s not a ligero grenade either. Instead, it’s a smooth and tasty smoke with the flavors one typically expects from a maduro of Nicaraguan provenance: chocolate and wood built on a dry tannic chassis.

I often find maduro cigars to be less interesting or complex than their natural brethren, but that can’t be said of Sabor de Esteli. My only criticism is that the smoke is quite dry — a pint of your favored stout or porter might make a nice companion here. Maybe two pints. 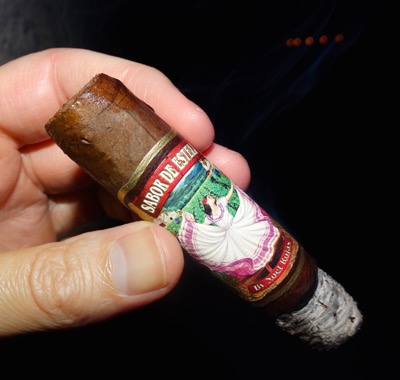 You won’t find this one next to the King Edwards at the gas station, but with distribution from the House of Emilio it’s not too hard to find. MSRP is around $8 USD for the toro.