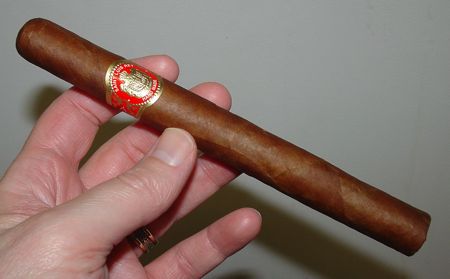 This is one of the last of a box of Saint Luis Rey Cazadores that I bought in late 2005 to conduct an aging experiment.  Soon after this the Cazadores vitola went out of production.  The manufacturer toned down the blend for the other sizes in the line, but this is the original Honduran blend. After reading so much about how well Cuban cigars age, I wanted to see how a full-bodied Non-Cuban cigar would hold up over a few years. After acquiring some aged Camacho Havanas that had become extremely mild over the years I wanted to compare different styles of non-Cuban cigars after a few years of aging.

When I first cracked the box I found the Cazadores to be aggressive, but tasty — woody and spicy with a peppery bite. Two years in long-term parking mellowed the smoke significantly, allowing more distinct flavors of leather and cinnamon to emerge, while still retaining some of the original bite.

The St. Luis Rey Cazadore has not suffered at all from its long cedar nap. The wrapper is just as pretty as it was on opening the box in 2005, and the roll is solid with just a bit of give. One improvement made over time is the burn — these senior smokes are burning righteously, though the ash is still a mite flakey.

The first few puffs on the Cazadore are reminiscent of the young cigar — a touch of spice on the tongue — but this sensation quickly dissipates and is replaced by a smooth, almost creamy smoke. The smoke texture is still full in body and has a decent kick, but this feisty Honduran of 2005 has finally matured into a respectable citizen of the world.

When new this cigar’s aroma was almost undetectable amidst the hammering that it gave the palate, but five years later it reveals an enjoyable and subtle spice over an earthy foundation.

The mid-section of the cigar is still hearty, but its spirit has waned over the years. More than anything I enjoy the cedar and light spice on the nose — cinnamon or nutmeg I think — and the smooth earthy flavor. The final section gets a little more serious as the black pepper kicks in again, but the flavor loses complexity and eventually flatlines.

I think these cigars are probably a little past their peak at this point. The flavor isn’t completely washed away yet (as happened with the Camacho Havana after six years) but the complexity of the cigar is waning. The toasty, earthy flavor of this 5 year-old blend is still very enjoyable though, and the soft subtle spices that have emerged in the aroma are a nice surprise.

Aging this now -extinct SLR blend has produced a pronounced change in flavor as well as performance, and each stage of its maturation has revealed a different set of characteristics. That’s what makes aging cigars fun. Leave a comment if you have any suggestions for other blends — especially Non-Cuban cigars — that you think age really well.

This mysterious cigar, first reviewed in April 2006, is from a 2005 box that has an uncertain history.  When I first purchased these from JR Cigars I could find no listing for St. Luis Rey Cazadores anywhere except JR, and nothing has changed since then. (They are unlisted by the manufacturer, Altadis USA, though JR still lists them as “Out of Stock.”) The current SLR is a medium-bodied multinational blend with a Nicaraguan wrapper, while this one is still a full-blooded full-bodied Honduran.

The “Cazadores” is a traditional Cuban production vitola — the Cuban Romeo y Julieta is probably the best known example — but this double corona sized cigar doesn’t even come close to meeting the traditional 6 7/16 x 44 Cuban format.

So why this cigar is called a “Cazadore” is as confounding as the fact that it no longer exists, because it’s a nice full-bodied cigar that so far is aging beautifully.

Aesthetically this old SLR is gorgeous — a smooth leathery colorado wrapper that has few veins and almost no imperfections. The roll is perfectly consistent and the head is flawlessly shaped and wrapped. The one surprise is the lack of a triple cap — with a roll this perfect I’ve come to expect one, even if here it really isn’t necessary.

I was prepared for this cigar to have lost some weight over three years in storage, but it seems to be as brawny as ever. It starts up with the same bullish glower that I remember so well — pepper with a leathery aroma and a good kick from the git-go. The draw is good but the thick juicy wrapper requires a correction almost immediately, within the first inch and half. (Since this was the last correction needed, I’m calling operator error… toast that foot evenly.)

The middle third is meaty and rich — just what I’m looking for from a Honduran cigar. The aroma takes on a woodier aspect at this point with a dash of cinnamon. I didn’t note this in the earlier review, and digging through the cluttered humidor of Smokes Past I’m not finding any memories of such subtleties.

The last third returns to darker peppery flavors and leather, getting stronger by the inch. I was hoping that this cigar would have mellowed a little in this regard, but after three years it’s still in fighting form.

My experience with aging cigars has so far shown that after a year or two the most noticeable change is in potency — I’ve seen this with the Camacho Havana (6 years) and the Angel 100 (2 years) and with several other brands over shorter periods of time. Strength diminishes and subtler qualities emerge. For the most part the Saint Luis Rey Cazadore is an exception to this, at least so far. I still have half a dozen of these put away, so we’ll have to see if the weight of the years can eventually tame down these unruly Hondurans.

The Padilla en Cedro was a special edition cigar from Ernesto Padilla that was released in 2005. Production ceased sometime in 2006, and to my knowledge these are sold out everywhere at this point in time. It’s a mild Connecticut shade style cigar — an unlikely candidate for aging, to be honest.

When I first received these in early 2006 they were almost bitter. The tannins were puckery strong and not to my liking at all, especially not in a Connecticut shade selection. The blend just seemed all wrong for that.

But when I last checked in with the Padilla en Cedro it had improved remarkably from its fresh state: nine months in the humidor did wonders. The tannins had mellowed quite a bit and the cigar was a much smoother, and enjoyable, smoke.

And now, after two years, this robusto is completely transformed. While still mild, it has grown far more complex and subtly sophisticated than I thought possible. The only way in which it seems to have suffered is in appearance — the wrapper has become slightly faded, more drab and splotchy, though it seems to have retained its sheen.

Remembering this cigar’s original character, I was expecting at least a hint of tannin, but for the first third there’s nothing but nuts and honey sweetness, with a touch of vanilla that was not in the fresh cigar at all. A remnant of tannin is apparent in a generally dry flavor, but it’s nothing that approaches a full blown pucker.

At the half-way point the cedar qualities come to the fore, and a little black pepper sets in. The finish lengthens and there is a more substantial aftertaste, thanks in part to the pepper. As the flavor on the tongue gets stronger, the aroma seems to fade a little, which makes the Cedro a little less profound. A lot of its subtlety is in the nose.

Somewhere around the 3/4 mark it dwindles to a merely average cigar. The flavor bottoms out and veers toward bitterness — a slight disappointment considering how wonderfully the trip started.

Construction values here remain consistently very good on all levels — a perfect burn, a streaky but solid ash, and an effortless draw.

I suspect these robustos are at their peak right now. The highlights of this cigar — the gentle sweetness and vanilla overtones — are subtleties that I can easily see vanishing in a few months to a year. This seems to be the problem with aging mild cigars, though in this case it has really paid off. I may hang on to a couple of Padilla Cedros for “research” purposes, but the rest of them are in my sights right now.