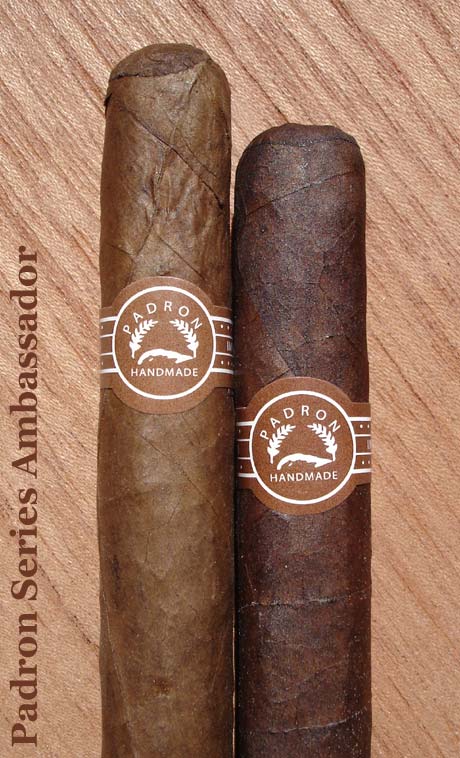 This comparison review is one in a series on the original Padron line of cigars. When we have completed reviews on the entire line, a vertical tasting for each wrapper will be published. Each review will be an amalgam opinion of cigarfan and lucky7 along with that of the guest reviewer(s). Our guest reviewers for this vitola are:

The Ambassador shares a ring gauge size with two other vitolas in this line: the Palmas, which is about half an inch shorter, and the Londres, which is about an inch and half shorter. Conventional wisdom would suggest that all of these cigars should taste pretty much the same if the blend is consistent, but so far that hasn’t been our experience. The Londres fared rather poorly in our assessment, while the Palmas garnered applause.

We will be comparing all three of these against each other in our vertical review at the end of the Roundup. For now, we are going to see how the natural stacks up against the maduro.

The natural Ambassador is rolled extremely well, despite the fact that it looks like many of the natural cigars in this series: slightly shabby. The caps on some of these looked like they’d been slapped on, and the heads of a few samples suffered wrinkles. There were a few water spots, but in general the wrapper is a uniform milk chocolate color with a fair amount of oil for a natural leaf. By now we’ve come to expect this. As Matt says, “Typical of almost every Padron, the cap is sloppily applied and ugly.” With most of the cigars in this series it’s best to not trust in appearances.

The roll is even and firm, as is the draw. The prelight characteristics are grassy with a little leather, along with the basic sweet tobacco traits. Ricky reported some pepper on the prelight draw.

Everyone noted a very firm but manageable draw on the Ambassador; the flip side here is that the burn was very slow and results in a cigar that lasts for well over an hour, which is slightly surprising given the slender stature of the stick.

This lonsdale starts up with a touch of trademark Nicaraguan pepper, but quickly mellows to “a base of toasted wood and leather.” Matt found the first third to be earthy with a dry finish, while Ricky picked up on the sweetness of the natural tobacco: “honey and wood with a slight pepper background.”

The texture of the smoke becomes creamier after the first third, or as Matt says, it was “smooth and creamy…it has a chewy feel to it.” Later he noticed that the flavor changes to “notes of black coffee and a smokiness with a nutty flavor.” Ricky marked the departure of pepper, leaving leather and wood. Cigarfan picked up on Matt’s coffee flavors as well, with scattered shots of cocoa.

Both Ricky and lucky7 experienced burn defects at various times: in the first third lucky7 resorted to the torch to remedy a canoe, and in the mid-section Ricky’s Ambassador “started to have major burn issues; hard to keep lit. Very little smoke.” Matt and cigarfan reported no problems with their samples. 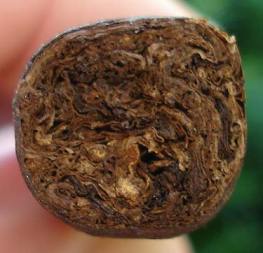 The last third becomes predictably more intense. Flavors of “very heavy leather” and burnt wood take the spotlight, and the stick ends with a peppery bang. Both Ricky and cigarfan found increasing bitterness, while Matt lamented that “it’s lost it chewiness 😦 but that’s ok. A great finish from a great cigar.”

The maduro Ambassador is easily distinguished from the natural, and is in fact the darkest maduro we’ve encountered in the series so far. The roll is a bit lumpy, but firm, and like many in the series this cigar has a slight box press. 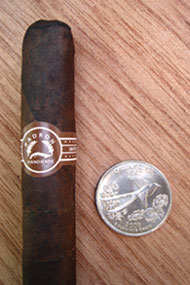 The prelight draw on the maduro Ambassador is firm to tight — this seems to be a characteristic of the size — but as with the natural this results in a slow cool burn. Other prelight traits were typical of Padron maduros: earthy sweet tobacco with remnants of fermentation, namely barnyard scents and a hint of ammonia.

It opens up with a little bite, but soon settles into a flavor that was unanimously described as chocolate. Side dishes included leather, according to Ricky, and notes of toasted wood. Cigarfan found that sweet hazelnut quality that occurs frequently in Padron maduros (especially the small ring gauges) and described the aroma as having a coffee liqueur-like quality.

Again, our reviewers were unanimous in their selection of a descriptor for the second third: creamy. (We are giving Ricky credit for saying it was “very smooth on the palate.”) A complex brew of other flavors were mentioned as well: coffee, raisin and spice, leather, wood, and even toasted marshmallows.

At this point the cigar was medium bodied, but as Matt pointed out, it was fairly mild in strength. The creaminess of the smoke is quite full and the aroma is impressive, or as lucky7 says, “some kind of excellent.” In many ways this lonsdale smokes like a much larger and refined cigar.

The body builds in the final section of the stick, approaching full at the nub. There are no striking developments in the last stage, just continuing wood and leather flavors with sweet overtones. The sweetness subsides towards the nub and is replaced by predictably burnt and bitter flavors. Despite this, Ricky said, “I nubbed this one till my fingers burned.”

The wrapper on this cigar really runs the show: a fantastically rich aroma and a creamy smoke that coats the mouth in chocolate and woody goodness — exactly what we’re looking for from a Padron maduro.

Both lucky7 and cigarfan were impressed by the natural Ambassador, but they were blown away by the maduro. It’s hard to believe a cigar this good is available at such a reasonable price. Matt, on the other hand, preferred the natural wrapper:

I have always enjoyed Padron maduros more than the naturals, but that wasn’t the case this time. The maduro was a good smoke with decent complexity and enjoyable flavors but it just didn’t do as much for me as the Ambassador natural… the natural was an excellent smoke, the maduro was merely ok.

The only real issues with this cigar were construction related, in particular a tough draw that we all had to fight with to some degree. This is a common problem with small ring gauge cigars, but then again, 42 is not all that small. Despite this, the Padron Ambassador will find a spot in our daily rotations. At a box price around $2.50 per stick, it’s almost unquestionable.

Thanks to Ricky and Matt for giving us a hand with this review. You can find Ricky directing his forces at Cigar Command with reviews and news of the good fight against the enemies of tobacco, and Matt’s Cigar Journal has just celebrated its Third Anniversary. Congratulations Matt!