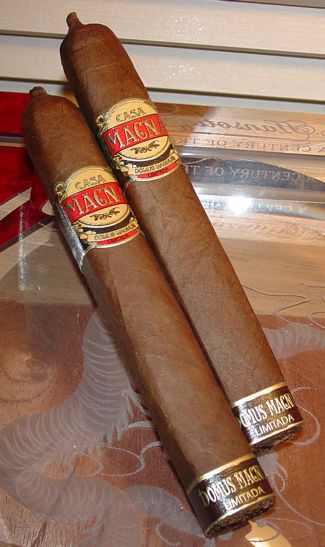 Casa Magna won the critics’ hearts in 2008 with its original release, the Casa Magna Colorado. It won my heart as well, and its modest price has kept me coming back for more. So it’s no surprise that the team of Quesada and Plasencia have extended the brand twice now, and as far as I’m concerned it’s just getting better.

Domus Magnus is a Nicaraguan puro utilizing a sun grown wrapper leaf from Jalapa. The blenders do not disclose too much detail about the rest of the cigar’s composition, merely noting that the binder and filler are Nicaraguan. Only two sizes are made, a  5 3/4 x 52 size called “Optimus” and a slightly larger 6 1/2 x 55 parejo called “Primus.” The cigars are presented in 10-count boxes in a limited release.

…is a full bodied cigar that should be enjoyed after a steak dinner and paired with a single malt Scotch from the Speyside sub-region of the Scotland Highlands.

So I naturally smoked mine after a burger and paired it with a Sierra Nevada pale ale from the sub-region of my refrigerator’s bottom shelf.

The Casa Magna Domus Magnus is a box-pressed cigar presented in boxes of 10.  The wrapper is a soft ruddy color, somewhat dry but smooth with a few fine veins. The cap is well constructed and terminates in a pig-tail which has been clipped instead of tied in the traditional knot.

I really dislike foot bands, but this one is easy to remove and discard. The draw is firm and the roll is solid. I would have preferred the draw to be slightly looser, but the few reservations I had about the draw were compensated by a rock-solid ash. The burn was mostly even, above average for a pressed stick, and required no correction.

My first impression was that this is a much smoother cigar than the Casa Magna Colorado. The smoke texture is mild to medium, but the flavors are quite complex, especially on the nose. Woody aromas predominate — cedary spice and softer notes of sandalwood, while the palate flavor is understated, at least for the first half of the cigar.

In the second half the smoke picks up a little more body and palate structure as flavors of nuts and earth emerge. The scents on the nose continue to complement these new flavors, but the increasing richness of the earthy component tends to overpower those more delicate subtleties. Some black pepper appears in the last inch of the cigar, just to verify the blend’s Nicaraguan birthright.

I was pleased but not thrilled by the Domus Magnus’ opening act, but the dramatic transition in the second half was truly impressive. A little more body in the first part of the smoke and this could easily be a Top Ten cigar for me. As it is, it’s still a very fine cigar.

At around 8 to 9 USD this incarnation of the Casa Magna is not a cheap thrill, but for fans of complex and medium-bodied cigars, I think it’s well worth the expense. This is a limited edition blend, so be sure to snap up a few of these if you can. 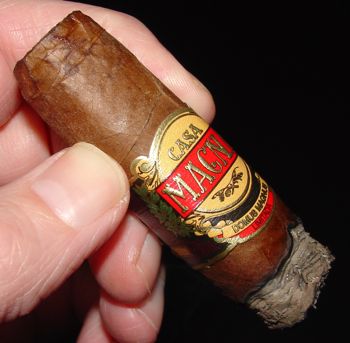