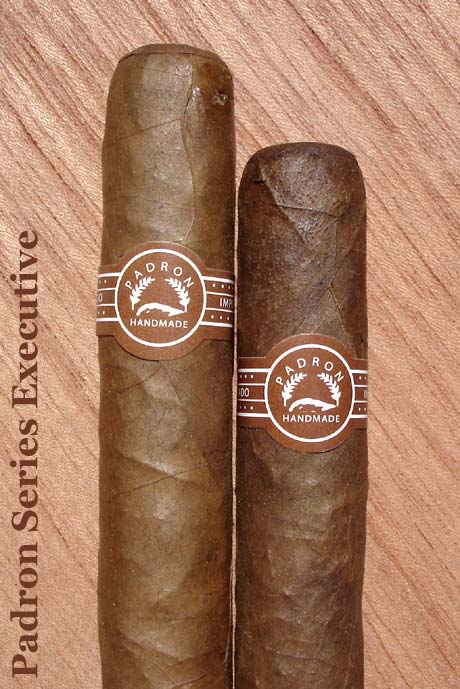 This comparison review is one in a series on the original Padron line of cigars. When we have completed reviews on the entire line, a vertical tasting for each wrapper will be published. Each review will be an amalgam opinion of cigarfan and lucky7 along with that of the guest reviewer(s). Our guest reviewer for this vitola is:

At one time the term “double corona” referred to any large parejo shaped cigar, roughly twice the size of a standard five-inch corona. Over time the term became a little more refined, especially when Winston Churchill’s favorite vitola was introduced commercially in the mid-twentieth century. Compared against the “Churchill,” the double corona is just a bit bigger: a 50 ring gauge as opposed to the Churchill’s 47 or 48, and slightly longer by a half-inch or so.

One of the interesting things we’ve learned over the course of the Padron Roundup is that the size of the cigar does not necessarily correlate with smoking time. Padron’s double corona entry, the Executive, is indeed a large stick and requires a good hour and a half to two hours to smoke in a leisurely fashion, but this is only slightly longer than the time required for several of the smaller cigars.

The natural wrapper on the Executive is unusually uniform in color — an even milk chocolate with some veiny roughness and fine grain throughout. The roll is even and a little lumpy on close inspection.

Construction values were inconsistent throughout the review samples: some cigars were rolled a little too loosely and displayed the slapdash cap we’ve become accustomed to, and other cigars had perfect draws and surprisingly neat heads. Small holes near the cap, a light patch that almost looks like a glue smear, and a disintegrating wrapper that exposed the binder might have spelled disaster for lucky7, but he wisely decapitated his Executive at the quarter-inch mark after assessing the situation. Cigarfan’s sample was nearly perfect, including a well formed single cap, and Jeff’s cigar was a combination of aesthetic flaws and a good roll:

This is a firm veiny, rugged, lumpy looking stick! Definitely not your eye candy! Upon taking it out of its cello, I immediately noticed the barnyard smells. Quite pungent actually. Easy clip with pre-lit flavors of spice and wet hay. It had a perfect firm draw.

Other pre-light traits were typical of the line — barnyard and hay scents on the wrapper — though lucky7 found a “chocolate tobacco” note on the foot, which is somewhat unusual. The cold taste was of familiar sweet tobacco.

The Executive natural starts up easily without the bite common to Nicaraguan puros. After a few puffs it picks up a little zing and the bright acidic taste that occurs with many of Padron’s larger ring gauge cigars. Gradually the flavors settle into a woody/leathery foundation and some light cocoa notes emerge sporadically. The finish is very short. Jeff found the first third to be earthy, “smooth and mellow, not too complex.”

The second third continues in the same vein with a smooth toasted wood flavor that becomes increasingly creamy in texture. Lucky7 reported that the “nose twang” from the first third began to dissipate in this section. We all noticed a lack of development until the half-way mark. As Jeff points out,

That’s when I noted a black coffee taste that combined with the hay. Very nice combination. Still very smooth and mellow!!

From this point and through the last third the flavors intensify, taking on more burnt wood and coffee flavors with a dash of pepper. The ash is a solid medium gray color and shows evidence of the grain that we’ve seen in some of the other vitolas.

Overall, the natural Executive is a very smooth, medium-bodied cigar that never overwhelms the taste buds or the nervous system with nicotine. There is the expected slight bitterness at the very end, but that’s after 90 minutes of relaxing, easy-going smoke. Lucky7 felt that the size was nicely balanced in the hand (unlike the Magnum) and noted that “a lot of the other Padron Series vitolas heat up considerably toward the nub but not so with the Executive. It was very well behaved… On the other hand, it’s sure a long time to spend with a cigar.”

I’d rate it about a medium strength and body until the end. Then it kicked up a notch. All in all, a very good smoke! I only wished it would have started the way it ended!! Almost two hours to finish!!

The Executive maduro is only slightly better looking than its natural sibling — its dark brown wrapper shows a little grain and a dull sheen. The wrapper is rough but relatively attractive by comparison to others in the series, though it sounds like Jeff disagrees: “Another ugly stick! Once again, a firm veiny, rugged, lumpy looking stick!”

The roll was inconsistent across the samples, from slightly soft with lumps and dents to firm and solid. A few of these also had a slight bend, a drooping which did nothing to enhance its aesthetic appeal.

The prelight qualities were as expected: barnyard with a hint of chocolate. As Jeff notes, ” The barnyard smells dominated after taking it out of its cello, though it’s not as pungent as its natural brother. The pre-lit flavors were much more spicy, shadowing hints of earth and hay.”

Both Jeff and lucky7 agreed that the draw on this cigar could have used some tightening. Lucky7 said it was “too airy; like breathing” (though it tightened up around the 2/3 point) and Jeff said that “the draw on this one was much lighter than the natural, almost too light.”

The Executive maduro opens up without the bite common to Padron maduros, but at the same time it doesn’t forego the pepper and spice flavors to which we are accustomed. Cigarfan found the base flavor to be woody, with accents of coffee and a raisin-like sweetness on the nose. To this lucky7 added some leathery notes, and Jeff found earthy flavors in the background.

This melange of flavors and aromas continues on without too much development into the second third. The finish remains fairly short up to the mid-point, where the flavors begin to intensify. At this point Jeff felt the spiciness faded a bit and was replaced by black coffee, while cigarfan noted bittersweet chocolate and a sweet char on the nose.

The last third becomes earthier, but for the most part remains the same. The finish is dry and grows increasingly peppery. Lucky7 reported that “for the last two inches the flavor is mostly creamy strong tobacco with just a tad of sweetness hanging around; it’s definitely more peppery.”

Jeff felt that the maduro Executive was not as mellow as the natural; on the other hand, lucky7 and cigarfan thought that by comparison with other maduros in the line, it was relatively tame. All of our reviewers were happy with this cigar, saying it was “a very nice smoke!” and “I would recommend it without reservation.” Additionally, at a box price around $4.25 per stick, it’s a great value, particularly for a double corona.

Though we ran into a problem that seems common to the series — sloppy finish work on the heads of the cigars — the construction values for both natural and maduro Executives were overall pretty good. Lucky7’s natural cap problem seems to have been an anomaly. The fact is that cigars in this series are everyday value cigars, and this kind of thing is expected to occur every once in a while.

Our reviewers did not come down decisively for one wrapper over another; the maduro was judged to be a bit harsher, but also a bit richer, than the natural, while the natural won us over with its smooth cocoa, coffee and sweet tobacco flavors. Both were excellent, easy smoking medium-bodied cigars that held their own for 90 minutes or more. Lucky7 sums it up for this round’s review crew:

I liked both of these cigars. If I had to choose one or the other, I’d probably reach for the Maduro. But then I am a sucker for Maduro wrappers with the typical sweetness and flavor depth they impart. The Padron Series Executive was a tasty, even tempered smoke well worth the money. I will be going there again, even if I can’t spare the whole hour and a half!

Special thanks to Jeff for contributing his thoughts on the Executive. Be sure to tune into Cigar Jack for more of Jeff’s reviews and the latest news on the cigar world!