Altadis USA is engaging in extension frenzy once again with its Montecristo Reserva Negra, increasing the number of Montecristo blends currently available  to seven.  Introduced last summer, this is the first “official” Montecristo to arrive dressed in a maduro wrapper, and it’s a dandy.

I was really surprised by the appearance of this cigar, since I expect nothing less than sheer class from Montecristo — the wrapper on this stick is a lackluster dark brown color, a matte brown (if there is such a thing.) It is strangely lacking in oil, which I find a little off-putting in a maduro. If it weren’t for the elegant looking band I would not take it for a premium smoke at all.

This unprepossessing wrapper is a product of Mexico. I see you eyeing the exit sign, but stay with me for a minute, because the San Andres valley produces some stellar maduro. 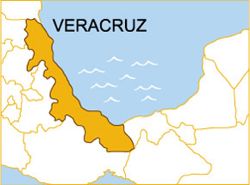 Situated in the mountains of the coastal state of Veracruz, the San Andres valley is in an area called “Los Tuxtlas.” The region is dominated by dormant volcanoes and the giant lake Catemaco. Agricultural activity has being going on here for over 5000 years, and today the Cuban expatriates who grow tobacco in San Andres are adding to that history.

The soil in San Andres Tuxtla has been compared to that of Cuba’s Vuelta Abajo — a mixture of rich clay and volcanic sand. I suppose every cigar producing country has their “just like Cuba” claim — for Mexico, this valley is their Pinar del Rio.

The major tobacco producer here is Alberto Turrent, a fifth generation tobacco man whose great-grandfather used to throw seeds randomly on the mountainside and return a month later to find healthy plants big enough for replanting in the field. Today the process is of course more controlled, but the soil and the climate are the same. 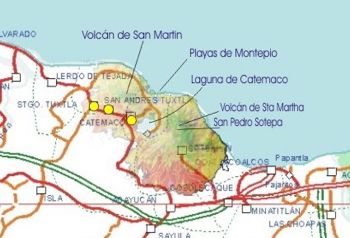 Several types of tobacco are grown here, including the leaf for Mexican puros like Te Amo and A. Turrent cigars, but what I’m primarily interested in are the crops destined to become maduro — what is usually called San Andres Negro or San Andres Marrón. (I’ve seen it spelled Morrón and even Moron, but since Marrón means “chestnut brown,” Morón is a hill, and Morrón isn’t in mi dictionario —  I’m going with Marrón.)

San Andres Marrón is fairly rare. It’s used in a few other Altadis made cigars: Gispert Maduro and Saint Luis Rey Maduro as well as the new H. Upmann Reserve Maduro but very few others. San Andres Negro is what you usually get with a Mexican maduro wrapper — a shiny nearly oscuro colored maduro leaf. If I had to guess I’d say this is why the Marrón is used so infrequently — the appearance. But as far as taste goes, Brown is the new Black.

The Montecristo Reserva Negra is available in five sizes, all of which are slightly larger in diameter than is traditional:

In addition to the San Andres Marrón wrapper this line utilizes a Nicaraguan binder and fillers from Honduras and Nicaragua. All cigars are square pressed.

I’ve gloated about the wrapper already, but believe me, my appreciation is not based on appearance — the wrapper looks like it’s been soaked and dried in the sun, and there’s a glue smear or two for emphasis. Without the snazzy black and gold Montecristo band this would be one seriously ugly duckling.

The robusto is a heavy cigar that feels very solid in the hand. It’s nicely packed, and the draw has just the right amount of resistance. It burns very slowly and consistently, making this a good 60 minute smoke. The ash is a little bit flaky at times, but it holds and falls firmly when tipped into the ashtray. The burn was mostly even, better than average for a square pressed cigar. Overall the construction values here were excellent.

It starts out deceptively mild, with an herbal or grassy base, to which the wrapper contributes a rich baker’s chocolate and mild spice. The smoke is very smooth and creamy in texture.

In the second stage the grassy flavor turns woody with a slightly sharp tang that I find in many Nicaraguan cigars. The chocolate overtones mellow a little into cocoa, but the aroma is still sweet and very enjoyable.

The final section takes on an oaky flavor and gets gradually spicier. The woody flavors at last become more leathery, and the finish is concentrated. Lots of black pepper. And lest I forget, a pretty serious nicotine kick. I wasn’t expecting it, but this is one of the heavier hitters in the Altadis lineup. 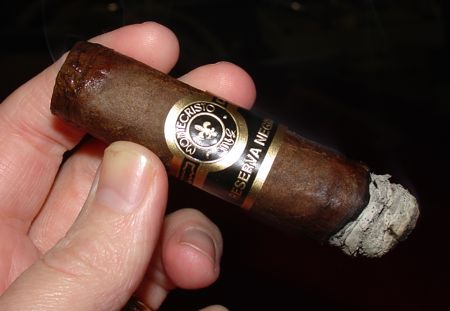 All appearances to the contrary, this is a delicious maduro, the best I’ve smoked in many months. It’s smooth and gentle to start but then it picks up speed, eventually becoming full-bodied, spicy, and fairly powerful. The transition isn’t dramatic, but it provides just the right amount of complexity. Combined with excellent construction values,  this is a very high quality stick.

At around 8 to 10 USD per stick or $160 for a box of 20, it’s not an inexpensive smoke, but I daresay it’s worth it. I don’t go crazy for too many Altadis cigars, but this is one I’ll be thinking about when I hit the B&M next time around.