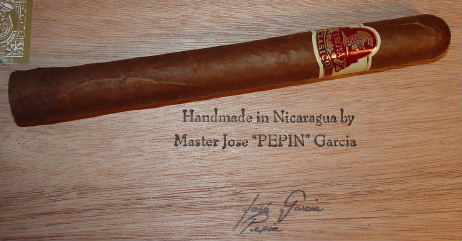 One of the exciting things about being a cigar smoker is that there’s always something new on the shelf, and cigar makers take full advantage of our excitable nature. It doesn’t matter to me if a cigar has been hailed as the Second Coming or panned like a Uwe Boll movie — if Pepin Garcia made it, I’m buying it. At least once.

But this phenomenon is not without its drawbacks. There is a commercial law of conservation at work here that says for every new blend that hits the shelves, an older one must go. Shop keepers struggle to find shelf space, and consumers have only so much money in their wallets. At the end of the day it’s a popularity contest. The winners are restocked and the losers go to the discount warehouses.

It’s disappointing to see the sun set on a great blend, but Pepin Garcia’s Troya Clasico is about to disappear into the glare. The company that distributed the blend was acquired by Britain’s Imperial Tobacco, which acquired Altadis, which is why there are still Troya brands in circulation — but they’re not Pepin’s blend. The newest Troya is the Clasico Limited Edition, blended by the late great Frank Llaneza. It’s probably a good smoke, but it’s not the same cigar.

It looks like the remaining Pepin Clasicos were picked up by one of the usual suspects (JR Cigar) and have been on the chopping block for a few months now. Late last year I picked up a couple boxes of the churchills at a cut rate price, and I may have to double up on that soon, before they’re gone forever.

But before I wash away in a tide of nostalgia I thought I should muster up an aging report on this great cigar. I broke a few of these out of long-term storage to see what three years has done for them.

The wrapper on this cigar is not quite as supple as it used to be, but I’d put that down to less than optimal storage conditions. My vinotemp does a pretty good job, but it’s not a locker at Alfred Dunhill.  The roll is solid and it clips cleanly. The draw is perfect, the burn is straight, and the ash is built like a dowel rod. My only complaint, if I have to have one, is that it burns a little quickly. But even at the band it doesn’t get hot.

After three years this cigar retains most of its identifying characteristics — primarily wood with a sweet, beany aroma, something like caramel and coffee. The Troya Clasico hasn’t undergone any radical transformations, but the bitterness is completely gone. Fresh Pepin blends almost always have a tannic edge to them, and although this cigar wasn’t over the top in that regard, it was still a touch bitter. The years have taken that edge off completely.

In the second and last thirds the flavor turns to leather, but the sweetness and mild-mannered nature of the cigar continues on. It’s smooth as butter, about medium in body, and easy on the nicotine. The flavor starts to muddy at the band, but that is after 60 minutes of pure pleasure.

My opinion of the Troya Clasico hasn’t really changed too much — I picked it as the second best cigar of 2007, and I don’t regret that ranking.

For me, a new Pepin Garcia blend is like a new Francis Ford Coppola movie. I don’t always like the movie, but my respect for his talent dictates that I will get in line on opening night and watch whatever it is that he’s decided to do. I feel the same way about Pepin. A lot of what he blends is too strong for my taste, but for me the Troya Clasico hits all the right notes, and it doesn’t play them too loud.

It’s one of the nicer cigars I’ve smoked this year, and it’s sad to see it go.