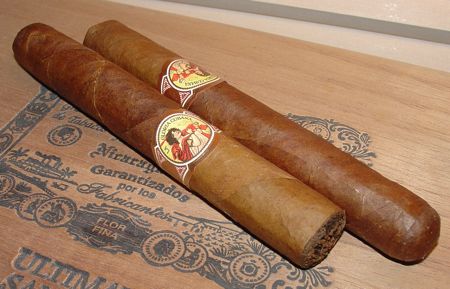 A few weeks ago La Joya de Nicaragua’s Cabinetta surprised me by demonstrating that not all dual-wrapper cigars are trumped-up fashion plates. In that case both wrappers have distinct and useful functions, and I am finding that again with La Gloria Cubana’s new Artesanos de Tabaqueros.

In 2008 La Gloria Cubana announced a new direction with its release of the Artesanos de Miami — a small production blend made in Miami by a team of 10 rollers. The Artesanos de Tabaqueros is an extension of that concept, but this time the team is a little bit bigger (18 rollers instead of 10) and the factory is a small division in the Dominican El Credito facility.

The cigar is the concept of Rick Rodriguez with guidance from master blender Benji Menendez and their pick of General Cigar’s vast “library” of aged tobaccos. The filler and binder is of Dominican and Honduran origin, but the main attraction is of course the wrapper. Or wrappers, I should say.

At the foot of the cigar, and extending for the first third, is a Connecticut Shade leaf. From that point to the cap, a much darker Ecuadorian Sumatra leaf takes over.  The marketing director for LGC likens the intial shade portion to an appetizer before the “porterhouse” of the Sumatra takes over.

The Artesanos de Tabaqueros is produced in three sizes, each of which seems to have the same measure of Shade leaf. I would expect that initial section to be proportional to the whole, but I guess a bigger steak does not net you a bigger appetizer. For the review I lit up the 650 toro size.

This cigar is very distinctive and attractive with its striking two-tone design. The band rides low on the cigar, covering the juncture where the claro and maduro-colored wrappers meet. The roll is solid and the draw is just right as well.

Connecticut shade burns extremely well, making it easy to blend a cigar that burns evenly.  The Artesanos de Tabaqueros takes full advantage of this wrapper’s superior burning qualities, and true to form it burns level straight.  I was expecting the burn to suffer once it hit the Sumatra leaf, but it follows through perfectly. Even the ash remains solid, though the Sumatra burns a slightly darker shade of gray.

The Connecticut shade portion is fairly typical of the breed — smooth, mild, and creamy. The flavor is a little nutty, and the aroma carries with it a pleasing and mild scent of cedar. The smoke texture is about medium in body, with no bite whatsoever. There is a touch of sweetness and an acidic tang on the finish.

The transition into Sumatra territory is obvious. If you were smoking this cigar in the dark you might think someone switched cigars on you. (There are several good reasons not to smoke in the dark. Having your cigar shanghai’d is just one of them.)

The flavor of the Sumatra wrapper is so different, it’s like starting a new cigar. By contrast with the Connecticut, the flavor is heavier, with a foundation of bittersweet chocolate. The aroma is woodier — more like hardwood than cedar, and it’s not as complex as the Connecticut section. The focus in this part is on the palate, where the chocolate flavor develops a tannic pinch and the finish is dry. The final inch, around the place where a band would normally sit, is marked by a coffee flavor that tastes a bit scorched as the cigar winds down.  This section of the cigar reminds me of the Punch Upper Cut, another General cigar with an Ecuadorian Sumatra wrapper.

Smoking La Gloria Cubana’s Artesanos de Tabaqueros is an interesting experience, and in addition to the two-wrapper novelty it is a very well made cigar. Both the first Connecticut and the second Sumatra sections are fine smokes in themselves, though they might not be the most interesting cigars taken separately.

The question is whether you are the type of smoker who wants to smoke two cigars back-to-back like this.  Personally, when I want to smoke a mild Connecticut shade cigar, I don’t want to mix it up with a heavier smoke. And when I feel like a medium or heavier bodied cigar, I don’t want to sit through a mild overture beforehand. That said, the Artesanos de Tabaqueros is still a very high quality cigar. At around 8 USD per stick, it’s definitely worth the experience.