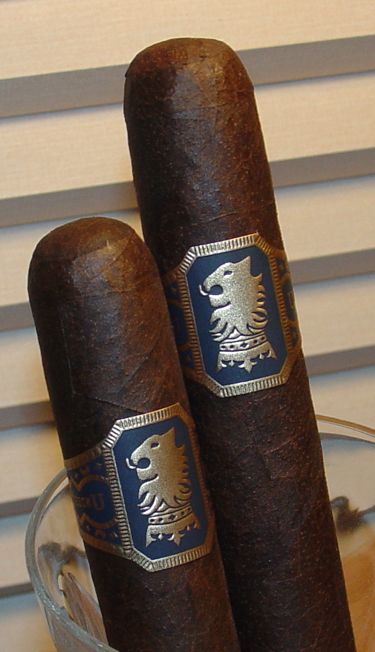 I’m not sure what an undercrown is exactly. Is it like a cardinal’s zucchetto? Or more like a football player’s do-rag?  When the pontiff comes home after a hard day and hangs up his mitre, does he look a little like Deion Sanders in his undercrown?  I’m guessing no.

Maybe the only true Undercrown is Drew Estate’s recent creation,  a version of their extremely popular Liga Privada No. 9 and T52 blends. But anyone who has ever set foot in a cigar lounge knows there has to be an “interesting story” to accompany the cigar’s genesis. And no, it isn’t the one about the newly discovered bale of Cuban leaf mysteriously concealed in the cellar for fifty years. The story is that the torcedors in the Drew Estate factory were smoking up too many Liga Privadas, thereby depleting the precious Connecticut wrapper and other choice cuts of leaf necessary for building that primo smoke. Plant supervisors ordered the rollers to stop smoking the damn product, but the torcedors were so distressed by this sensible business decision that they started rolling a different but very similar blend to smoke in place of Liga Privadas. Ha! That’ll show those meddling supervisors.

Stories aside, the Undercrown is evidently designed to be a less exclusive blend that still bears some similarity to the Liga No. 9. Instead of the Connecticut broadleaf that torcedors love beyond all measure, a Mexican San Andres wrapper is employed, and a different priming of the same Connecticut broadleaf is used as binder. The filler is a blend of Brazilian Mata Fina and Nicaraguan Habano seed.

Sounds good to me. I prefer San Andres to Connecticut anyway. 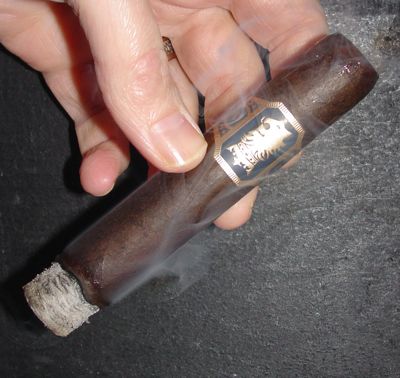 The wrapper on the Undercrown Robusto is perfectly even in hue and much smoother than most Connecticut broadleaf. It’s an oily dark maduro that in some cases might arouse suspicion because it’s so even and consistent. But the roll is almost as perfect — firm and even as a dowel rod but with an excellent draw. The head of the cigar is simple, just a single cap that needs no fancy winding because the edges of the cap are almost seamless.

The burn is remarkably even for a maduro-wrapped cigar, and the burn line is extremely sharp. It burns slowly, perhaps due to the robust ring gauge, and the solid ash is smooth and light gray in tone. It doesn’t really act like a maduro — it’s far too civilized. But its civility only goes so far.

The trademark characteristic of the Undercrown is an immense amount of resting smoke. The room scent is very powerful and it starts up almost immediately, so if you want to clear the room of non-smokers light up an Undercrown and watch them fly.

The initial flavors are smooth and somewhat dry with just the right amount of pepper on the palate. The main flavors are typical of maduro style cigars — cocoa and chocolate, but there is a note of cedar buried under all this. The smoke texture is so full in body that it is almost palpable on the tongue. The volume of smoke this cigar produces is  astounding, but the taste is not overwhelming at all. This is another example of a cigar with a full-bodied texture that is not a nicotine shillelagh.

The taste of this cigar is quite concentrated, but the flavors are not terribly complex. The smoke is almost too rich to carry a whole lot of subtlety, but in the last third I detected some raisins and increasing spiciness swirled in with the chocolate and cocoa-based flavors. It’s certainly complex enough to keep my attention, and probably more complex than most maduros.

Anyone who appreciates a good maduro will get a kick out of this cigar. Those looking for a high octane thrill may need to look elsewhere, but if rich, thick, chocolatey smoke with a pinch of spice — all in a moderate strength package — strikes your fancy, you’ll want to check this one out.  Prices are in the $7-8 USD range, which falls outside my everyday smoke zone, but I could fit this guy in once or twice a week easily. 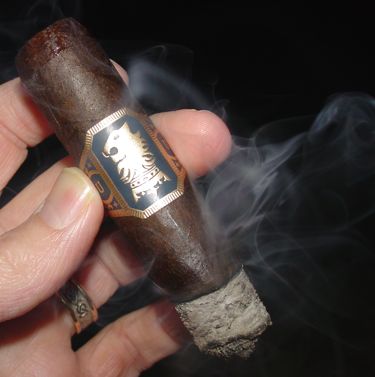 18 thoughts on “Undercrown by Drew Estate”