The CAO cigar brand has changed hands, moved headquarters, and reinvented itself, but the label’s new directors haven’t forgotten where CAO started: Music City, USA. The CAO Concert was blended by Rick Rodriguez as a tribute to Nashville, Tennessee, CAO’s original home town.
The music theme of the Concert brand is apparent in almost every way: the box resembles a Marshall amp, the bands are designed to look like guitar picks from the front, the upper parts of a Fender Strat on the sides, and fretboards meeting in the back. (Wouldn’t a Telecaster have been better for Nashville?) The frontmarks are concert-related, and the cigar was even given a sneak preview release at the Country Music Association’s Music Festival last summer.
I will make an attempt to restrain myself from abusing the music theme in this review. I will not not hammer on harmony or refer to the cigar’s opening act. I will not speak of overtures, or codas, or cadences. Not a note of it, I swear.
The wrapper is an habano rosado leaf grown in Ecuador, the binder is Connecticut broadleaf, and four different leaves from Nicaragua and Honduras comprise the filler. The cigar is made in four sizes, all 5 1/2 inches in length:

Construction Notes
The wrapper on the CAO Concert is dark, glossy, and almost veinless. Unfortunately, it is also very thin and prone to cracking. The head of the cigar is flat with wide shoulders. With a ring gauge of 54 this cigar is built like a fire plug. The draw ranged from easy to firm, and the burn was slow and even.
It’s an attractive cigar until the wrapper starts to crack at the back. The humidity where I live hovers around 10-15%, so desert shock might be the culprit, though that’s rarely a problem with other cigars. Like all of my other cigars, I stored these at 65%, but maybe the Concert requires a more tropical residence.
Overall construction very good, discounting for possible storage errors on my part.
Tasting Notes
The Roadie is a bit wide for my taste, but the flavors are smooth and well balanced. The cigar opens with cedar sweetness and a dusting of cayenne which quickly dissipates, leaving a medium-bodied base of coffee and some soft baking spices — cinnamon, mild clove, or maybe even sandalwood.
The second half of the cigar builds on the coffee base and adds a touch of musk. The aroma grows sharper, a bit spicier, but retains a lot of its sweetness. The Roadie stays balanced throughout, even while it transitions from light and sweet to darker and muskier flavors. It’s medium in body and easy to smoke. I didn’t notice any harshness at all and the cigar didn’t bitter at all until the very end, well after the second encore. (Damn. Almost made it.)
Conclusion
Conscientious and critical cigar smokers rarely get excited about medium-bodied cigars, but this is one that I would urge everyone to try. I was surprised at the complexity of this new CAO blend, and with its smooth demeanor and suave appearance, I highly recommend it. The Roadie is good for almost 90 minutes of tasty smoking, for which the $6.00 entry fee is a pittance.
I hope that the wrapper cracking was an environmental issue that won’t occur to many other smokers, because in every other respect it performed beautifully. The only thing that I would like to see changed is the design of the band. The little Stratocaster tips are easily bent and quickly become annoying. Maybe they’ll take up my suggestion and change it to a Telecaster, so there will be only one tip to tear off. Aside from that small complaint, this is a wang dang doodle of a cigar. 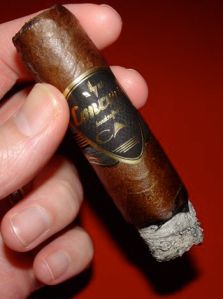