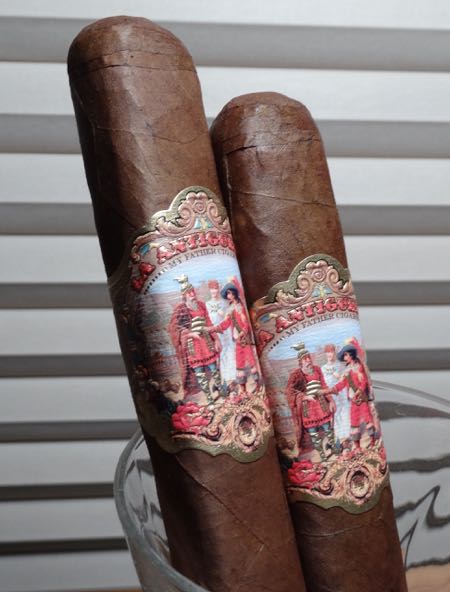 Sequels are not always a good idea on the creative side, but they are irresistible to both producers and consumers. Movies, TV shows — anything capable of continuation or spinoff demands a sequel when the original is a success. Cigars are no different, and we see this with brand extensions all the time. My Father Cigars had a hit in 2012 with Flor de Las Antillas, so they did the natural thing — they followed up on the success of that blend with another one and called it La Antiguidad.

I don’t think the Garcias are capable of making a mediocre smoke (barring the bargain market stuff) but I was expecting more from Flor de las Antillas. After all the hype and the stellar reviews (and the eventual 2012 Cigar of the Year crown bestowed on it by Cigar Aficionado) I was expecting a bit more. I’m still waiting for a My Father blend that revives the magic of the Rey de los Habanos years. So far I haven’t found it.

But the prospect of a new blend from “Don Pepin” and Jaime Garcia is enough to dry my tears, even if it is a sequel to a cigar I was slightly disappointed in. La Antiguedad plays on the same theme as Flor de Las Antillas — the 19th century Cuban artwork, the red cloth foot band, and the box press — but it is a somewhat bolder cigar.

All of the filler tobaccos in La Antiguidad, as well as the double binder, are grown on the Garcia farms in Nicaragua. The wrapper is an Ecuadoran Habano leaf described as “rosado oscuro,” which sounds to me like “colorado maduro,” but I will leave that distinction to the experts. The fillers are from three distinct regions in Nicaragua — San Rafael, Las Quebradas, and San Jose. The binders (two of ’em) are Nicaraguan criollo and corojo.

The cigar is made in five sizes, all box-pressed:

With its bright red foot ribbon and incredibly ornate band, the Antiguidad Toro is a fine looking cigar. The wrapper is colorado maduro in shade (or rosado oscuro, if you like) with widely spaced veins. It glistens with a slight sheen of oil. The cigar is box-pressed, but sharply enough to call it a square press. The head is nicely formed, but the triple-wound cap is not as perfect as the Pepin cigars of yore. The draw is excellent and the burn slow. The only criticism I can make on this front is that the ash was a little flaky.

La Antiguidad opens with a healthy churn of the peppermill, which is not a surprise from this cigar maker. After five or ten minutes the pepper wears off enough to detect some cocoa, along with leather and a hint of honey on the nose. The tannins are strong, lending a citric tartness to the flavor and creating a dry sensation on the palate.

Over the course of the cigar the cocoa, leather, and tart flavors bob and weave around an earthy core which makes its presence known primarily in the aftertaste. By the end of the cigar the pepper has returned, and it finishes with a nice little punch to the gut. The smoke texture is medium to full, and the strength builds from moderate to quite potent in the last round.

La Antiguidad deserves a place in the humidor next to other My Father heavyweights like the Don Pepin Blue and My Father Le Bijou, though I’d say it has more nuance than either of those. It’s not a towering thunderhead, but it packs a nice little punch. More importantly, there is enough complexity here to keep my interest for an hour and half or so.  MSRP is in the $8 USD range, which is about right for a cigar of this quality.

It’s not a return to the reign of Rey de Los Habanos, but it’s fine cigar nevertheless.

One thought on “La Antiguidad Toro”