I remember my first anniversary. My girlfriend surprised me with the announcement that we had been together for six weeks and it was time to celebrate. Then came the three-month anniversary. And the sixth. We didn’t make it to a year. I blame all the damn anniversaries. Well, not really… but it’s true. After a while Anniversaries can be a bit of a chore.

But not for cigar makers. It seems like nearly every manufacturer has a few Aniversarios in their portfolio these days, and Casa Fernandez is no exception.

As a brand name, Casa Fernandez is fairly young, but the company has old roots. The business that would become Casa Fernandez began as Tabacalera Tropical in the 1970’s. Eduardo Fernandez had already been operating Aganorsa for a few years when he purchased Tropical from Pedro Martin in 2002, but with Arsenio Ramos employed as a blender using Aganorsa tobaccos, the cigar maker emerged from the shadows of the shade cloth. So I think it’s safe to say that the anniversary this cigar celebrates is not so much a founding of a finished product as the beginning of an evolution.

The tobaccos used in the Casa Fernandez Aniversario are Aganorsa grown, including a Corojo 99 wrapper grown in Jalapa. After harvesting, the tobaccos were aged five years and the cigars were rolled in the small factory Fernandez opened in Miami in 2011. The 2014 release, a 6 1/4 x 52 parejo, was limited to 2000 boxes of ten. (The 2015 release was made in two sizes: a lancero and a toro size slightly larger than the 2014 parejo.)

Because this blend utilizes aged tobacco they may not have needed the bonus humidor time that I usually afford Casa Fernandez cigars, but they’ve been cooling their heels at 65% for almost a year anyway.

The Casa Fernandez Aniversario is a handsomely appointed toro, complete with the super premium accoutrement: a tasteful white band, a silver anniversary band, and a parchment sleeve etched with the company logo. All it’s missing is a black tie.

The wrapper is a smooth milk-chocolate colorado claro with subtly dimpled veins. The head is perfectly symmetrical and topped with a clean flat cap. The cigar has a slight box press which has relaxed a bit after resting loose in the humidor. It draws well, burns evenly, and produces a nice volume of smoke. The ash is a solid light gray.

The only construction flaw I encountered is that the wrapper, despite its beauty, is somewhat fragile and has a tendency to split. Careful storage and optimal atmospheric conditions are recommended when lighting up. 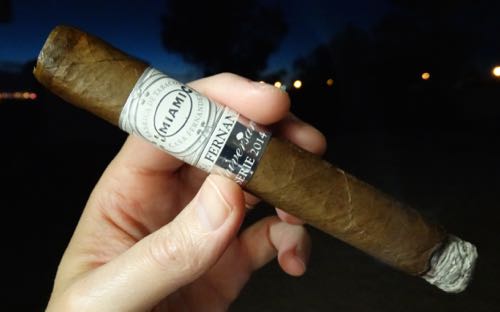 Cocoa jumps out at the first puff and stays in the driver’s seat for the whole ride. Some sweetness enters on the palate, rendering caramel after an inch or so. Some woody notes are present in the first half of the cigar which veer into earthy territory in the second.

The smoke is smooth, a little dry, but never heavy. Some pepper shows up toward the end, but that’s about it for spice. This toro is very easy to smoke, but it lacks the development that I expect in a cigar of this magnitude.

The CF Aniversario is definitely a super premium, upper echelon blend. It’s like a hot cup of cocoa on a cold winter’s day.  I would recommend this stick without reservation as a special occasion cigar for a novice smoker (assuming the construction holds up.)

Unfortunately, this blend lacks the complexity that veterans might expect in an Aniversario. (Compared with the Padron Anniversary blends, let’s say.) And of course there is the price. At $12.50 a shot it has some serious competition. All things considered, I still think it’s worth it.