The filler in the Cusano 18 line is reportedly 18 year old Dominican Oro. It was originally grown on an experimental basis by Hendrik Kelner, producer for Davidoff and many others, in an attempt to develop a Dominican wrapper leaf. Evidently that didn’t work out– according to an interview with Michael Chiusano in Smoke magazine they couldn’t roll a cigar longer than four inches with the resulting product. So after many years it found its way into the filler for the Cusano 18.

Both the binder and the wrapper are Connecticut Shade, and it’s a handsome wrapper, as you can see here: 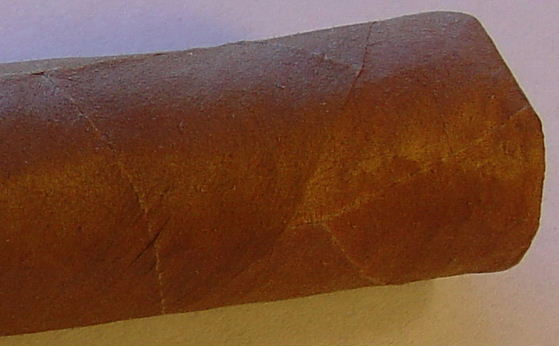 There are spots of green which I wasn’t able to pick up with my camera (still working on that lighting thing.) Aside from that, it’s a truly gorgeous cigar.

It was given a very respectable 91 by Cigar Insider, and at around 3.00 US it’s also eminently affordable. I wouldn’t rate it as high as that, I’m afraid.
It starts out a little rough, and it has an aftertaste I don’t particularly care for. For a mild to medium bodied smoke the nicotine content is quite high. On the plus side, it burns evenly with a lovely aroma. Woody with a caramel overtone, and a little vanilla. There’s also a nice spice here. For three bucks it’s definitely worth a shot.

It sounds stupid to say these might improve with age, seeing that they’re made with 18 year old filler, but they still seemed a little young to me. I might put a few away as an experiment, mad scientist that I am…emphasis on the mad. If I can find a Paired Maduro version I’ll be a maduro scientist!