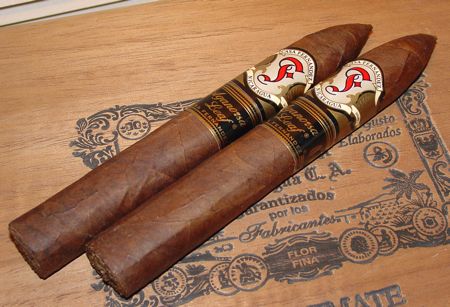 As one of the purveyors of Nicaragua’s finest black tobacco, Casa Fernandez (and its farms) really ought to be better known by now. If you enjoy Illusione or Padilla cigars, both of which employ Aganorsa Leaf as a key ingredient,  you’re just going to have to hunt up some Casa Fernandez products: Particulares, Condega, and JFR (Just for Retailers) are all bangin’ smokes.

Last year I surveyed a few of their offerings, including the flagship Casa Fernandez cigar,  so I got a little chill up my spine when I saw there was a new formulation on the shelves.

Aganorsa is an acronym for Agricola Norteña S.A., the tobacco manufacturing arm of Casa Fernandez, and one of Jose “Don Pepin” Garcia’s first employers after he left Cuba. For quite a long time the company (also known as Tabacalera Tropical) was satisfied with rolling just a few different blends and concentrating its resources on tobacco production. With the advent of Casa Fernandez it looks like they are promoting the cigar side of their business with more gusto. It’s not hard to see why.

The Aganorsa Leaf extension of Casa Fernandez is similar to the original line in flavor, but with its dark corojo wrapper it is bolder and more potent. It might sacrifice a little complexity in exchange for power, but until I do a side-by-side comparison I can’t say for sure.

The binder and filler are also Nicaraguan, of course, and are probably from the Aganorsa farms as well. The Aganorsa Leaf line is box-pressed and sold in boxes of 15.  Three sizes are available:

The Aganorsa Leaf torpedo is a solid and swarthy looking cigar. Its sturdy square press and dark, weathered wrapper give it a rustic appeal. The head is wrapped well and clips cleanly. It draws perfectly, though the burn is somewhat irregular, which is fairly typical of both maduro or oscuro wrappers and of box pressed cigars. The ash is a dark dirty gray streaked with black. If you smoke Illusione cigars you know what this looks like.

When you light up this cigar it is almost immediately apparent that you’re in for a ride. The smoke is thick, full-bodied, and rich. The flavors are crisp and sweet but heavy.

The first inch of the cigar is dominated by a sweet woody flavor, reminiscent of juniper smoke and the smells of late autumn as the temperature drops and people fire up the wood stoves and fireplaces. The smoke is smooth, but assertive.

In the middle section the assertion becomes more of an insistence. The flavors turn a little darker and less sweet: coffee and baker’s chocolate come to mind. The flavor is still crisp, but the smoke starts to bite a little. The finish is lengthy and the aftertaste spicy.

By the last third you’re either in it to win it or staring at the stars. This is a powerful smoke. The aftertaste is profound and cries out for a beverage to match — whisky would be a welcome companion. A strong aftertaste of pepper and char lingers long after the last puff.

For lovers of full bodied Nicaraguan style cigars, the Casa Fernandez Aganorsa Leaf is a must-try. Its powerful finish, peppery aftertaste, and solid kick are exactly what a lot of full-bodied cigar smokers are after. It is a little too aggressive for me to smoke on a regular basis, but occasionally even I like to get out the big guns. As long as it has the flavor and finesse to match the fire-power there is a place for it in my humidor. And this one achieves that balance. I also expect this cigar will age very well.

Boxes of 15 sell for around 100 USD, and singles are hovering around the $7 mark. Pick up a five-pack and let me know what you think.